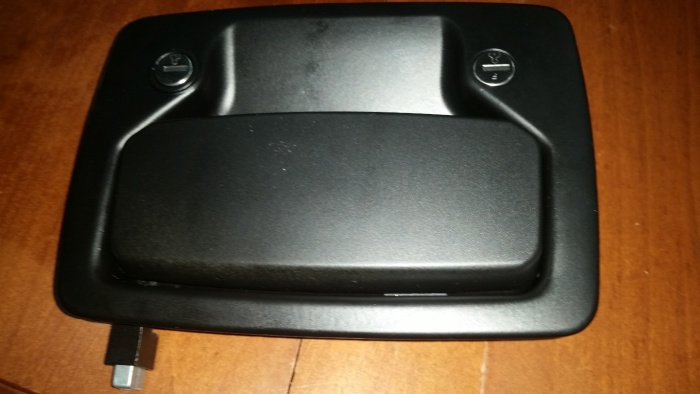 Each lock uses a different key for security reasons. I don’t always use the deadbolt but when I do****** Ha Ha!! I do use it if I am planning on being gone for a while or if I park in a place that I am not comfortable with the surroundings. One day when I opened the door I noticed that the deadbolt was crooked and was sticking out a little bit too far. When I touched it to check it out, it fell inside the door. I took the door apart and found that the actual deadbolt had cracked into 2 pieces. Upon examination it is easy to see how this can happen as it is made from cheap cast aluminum.

I did some research and found the cost to replace this lock is anywhere from $75 to $150. Not willing to put out that much money for a simple cracked deadbolt I decided to create a new one. There is a brass plate on the back of the lock that is riveted to the casting making it impossible to remove the metal rod that extends the deadbolt. However, I was able to remove the deadbolt by using the key to extend the deadbolt all the way out, then bending the rod up just enough to slip the broken deadbolt out. The closest home improvement store to me at the time was Home Depot. I went to Home Depot to try and buy a piece of flat stock that I could build the new deadbolt from. Nothing they had was thick enough so I had to use the MacGyver in me and be creative with something else. I was able to find a clamp that has a steel rod on it that was exactly the thickness that I needed and it was only $10.79. I quickly purchased it and headed back to the RV with the intention of creating a new deadbolt. Below is a picture of the clamp after I cut off what I needed.

This seemed to work better than flat iron as it appears to be made from chromoly steel which does not rust as easily as flat iron. I left the cutting outside in the rain and so far there has been no sign of rust. Armed with a hacksaw, dremel tool, a good metal file, vice grips and a power drill, I proceeded to remove everything that did not look like a new deadbolt. I was able to take advantage of the clamp itself by using it to hold it in place while I made all major cuts. Then I cut the length last and used the vise grips to hold it while I fine-tuned the new deadbolt. Below is a picture of the results.

Here is a picture of the broken and the newly made deadbolt. 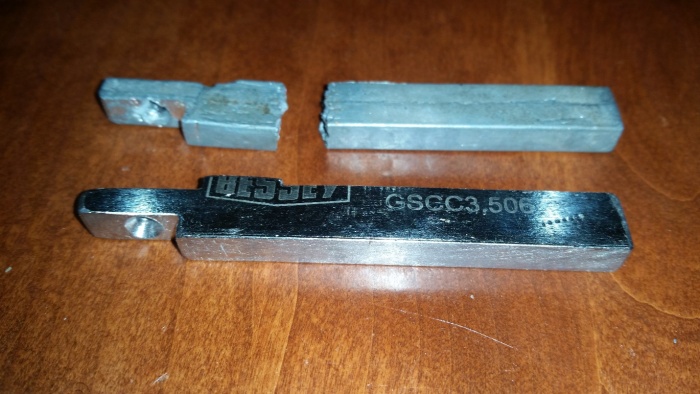 I installed the new deadbolt back into the lock the same way I removed it. It was a little challenging to get the rod perfectly straight again but I managed with the help of the vice grips to hold the rod down in the deadbolt hole while prying it up with a screwdriver. 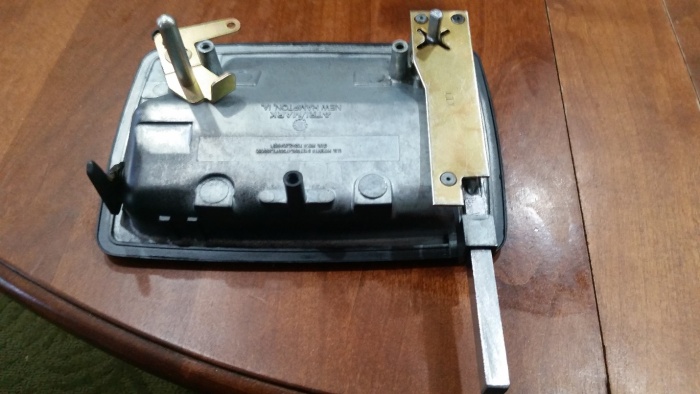 I reinstalled the lock into the door and it now works perfect again. I don’t think that the new deadbolt will break any time soon as it is made of steel and not cheap cast aluminum.

Keep an eye out for future posts of Roy’s RV Tips!  Ya’ll come back now, ya’ hear!