uesday, June 30, 2015 – Roy absolutely loves the gold mining television shows.  Whether its gold mining from the ocean or on land, he watches it!  He got me interested in the show Gold Rush a couple of seasons ago.  One of the mining company owners on the show is Parker Schnabel, a young man who inherited the business from his precious grandpa.

They mine pure gold in Alaska. In Colorado they mine gold ore and use a long process of crushing and then using chemicals on it, but what we saw at the second mine tour of the day looks a lot like what we see on the TV show.

The first mine we went to today was the Mollie Kathleen Gold Mine.

After purchasing our tickets in the Country Store we  had time to look around a bit and we did.  All around the surrounding areas are still standing, though deteriorating, abandoned mines.  Those are pretty interesting to see! They have on display old mining relics which were very cool as  you can see from the pictures below.

This was one of the other visitor’s car which was very neat!

The tour cost was $20 per adult and lasts about an hour. Mollie was the first woman in the United States to own a gold mine.  This was a non-active mine.  Hasn’t been producing since 1961.  The tour took us 1000 feet under the ground in a small (4’x4′ is stretching the size) metal elevator at 5 miles per hour.  6 full sized adults with jackets and hard hats on squeezed, rather difficulty, into the tiny elevator for the ride down. There are two elevator cages connected to each other, one orange and one yellow.

I thought the sign in front of the elevator at the surface was quite funny so I got Roy to pose in front of it! 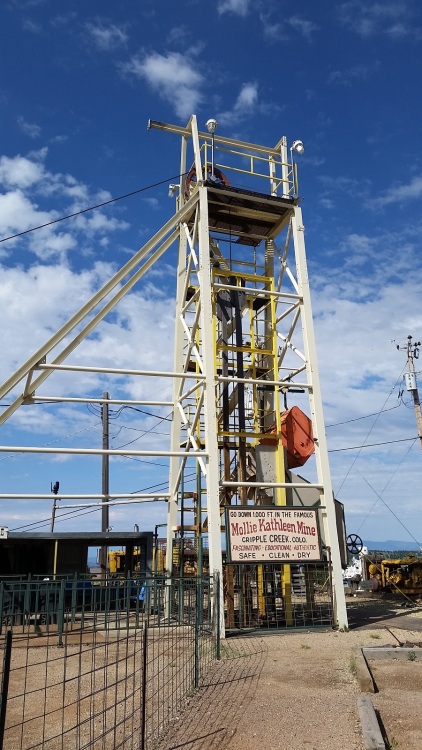 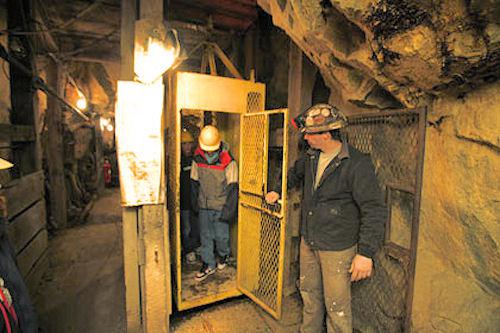 We had a wonderful guide, Alicia, who is a fourth generation miner.  She knew everything and share so much with us.  We went through the chronological advancing of mining techniques at various stations along the tour route.  She demonstrated each of them and as the technology advanced so did the loudness of the tools!

The tool storage area.  Pretty sure they have one on each level and there are ten levels within this mine.

The first tools used in the mine were hammers and chisels and dynamite.  The next two pictures below is of the next stage.

The green stuff is copper on the walls and ceilings through part of the mine.

The pile of rocks e were able to pick through as our take away souvenir.  We got an extra one for Madisyn.  They had quartz, iron, and gold in our pieces..

This is very important in the operation of the a mine.  A universally used set of bell rings is used in all mines to communicate.  This is posted next to the bell and a light is also there in case someone can’t hear the bell, hopefully they can see the light bulb light up!

This was the little tram we took for part of the tour, sure was nice to rest our feet for a bit!!

The type of mining uses chemicals to remove everything from the gold unlike the Alaskan mining where they get pure gold.   This was a very interesting tour yet I felt it was overpriced compared to the tour we got a the next stop.  I’m glad we went though and would recommend it to anyone wanting to learn about the type of mining they did there.

When we left Mollie Kathleen Gold Mine we drove over to the area’s Heritage Center to check it out.  A beautiful building with lots of information about the history of gold mining in the area.  There were over 500 gold mines in that area at one time in the past. 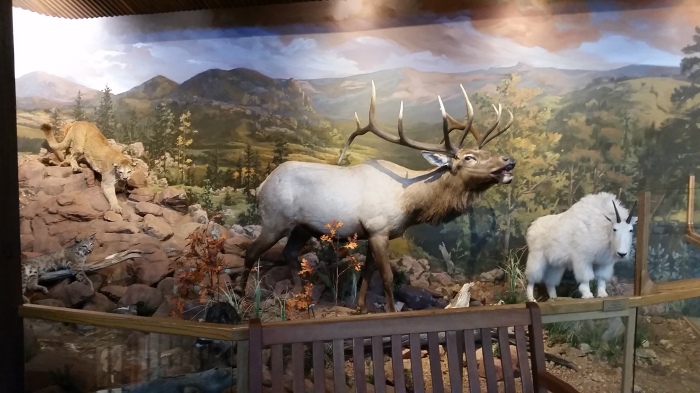 I think I’ll stop here before moving on to our next stop which was my favorite of the day.  Next we went to the Cripple Creek & Victor Mining company which is still in operation and which we got to tour from lots of different levels.  It was a great experience and I look forward to sharing it with ya’ll tomorrow!