Thursday, January 7, 2016 – We’re in whirlwind mode right now! Getting everything around the house and RV ready so we can to take to the road again on the 17th, Chip’s wedding coming up on the 16th and all that those two entail.

This picture is of the original television the RV came with. 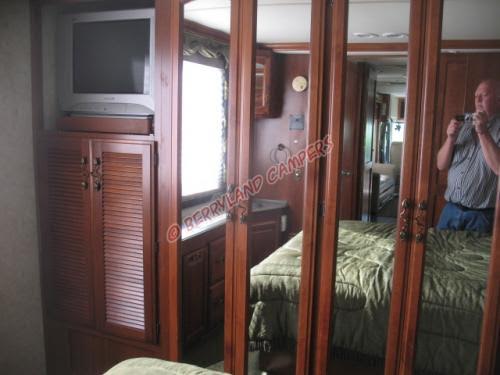 This is the newer television that he installed when we purchased the RV. He just removed it, creating the new storage space.

To install the new one he created a new bracket and installed a sliding television mount. 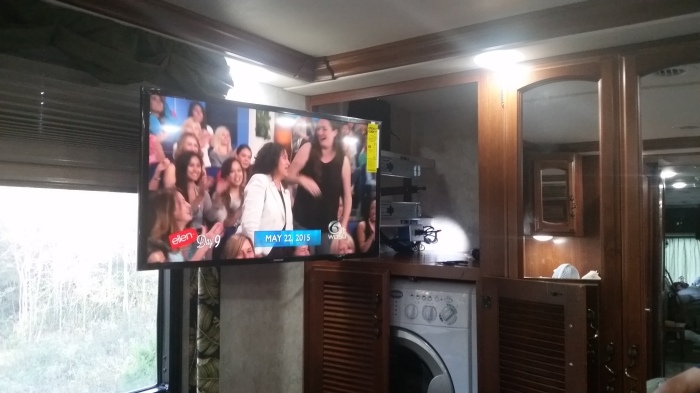 Then he built a wall to separate the new storage area from the new television. 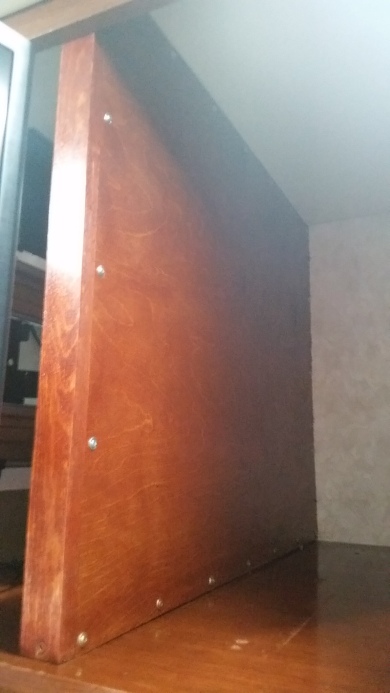 Now that the television was installed the the separating wall built he installed the shelving in the new space. The space is 13″ wide by 30″ deep. Lots of “stuff” fits in there!!

Since it looks really ugly with lots of stuff stored in there we purchased unfinished cabinet doors. After purchasing three or four different stains and winding up combining a couple Roy was able to match color of the the doors on the closet. The louvered doors that cover the washer/dryer have changed color over time with the heat from the dryer so it’s not a perfect match with those but it’s difficult to tell the difference between the new storage doors and the closet doors. Roy does everything so well with so much attention to detail! 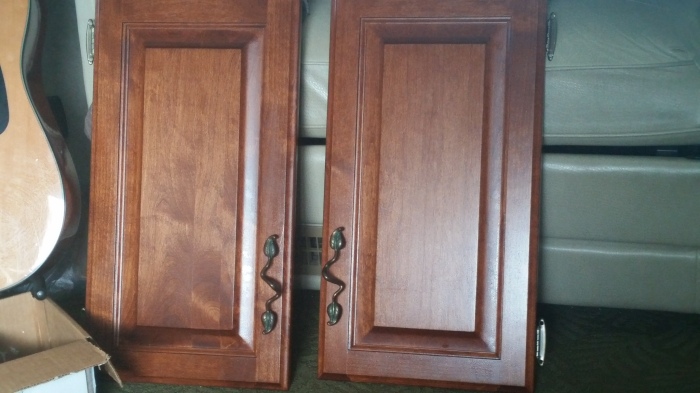 Here’s a photo of the finished product. 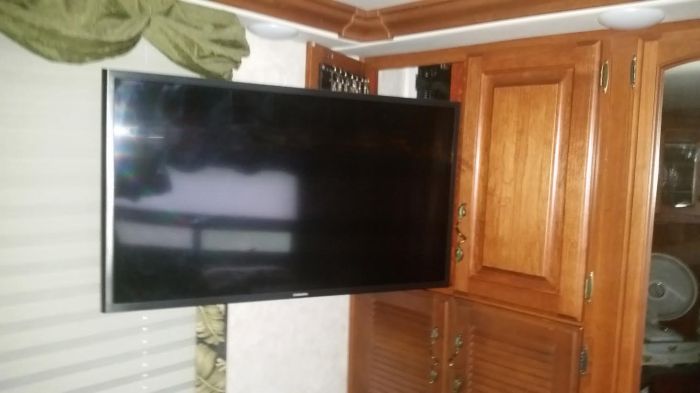 So much of our “stuff” that was crammed into our closet is now stored in the new space which makes our closets sooooo much nicer!

Roy baked one of his “family famous” lemon meringue pies for our new daughter in law Misty and Kallie! He baked a second one for he and I so I can attest that it was absolutely delicious. He hasn’t cooked one in many years but wanted to feed Misty’s love for all things lemon!

I made a batch of chocolate caramel turtles, which are all gone now!

Since we started RVing 3 years ago we’ve talked about having signs made for Dora (our RV) and Boots (our tow truck). Thinking it was going to be very expensive we let the idea just sit there. Roy recently found an online company that made the ones below on a transparent background! And the cost was quite reasonable! On Dora’s the wording that says rosalynandroy.com is in white so it doesn’t show up on the white paper background. 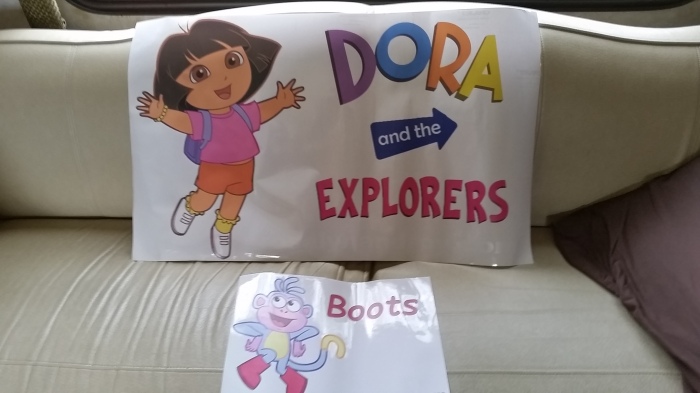 They are now installed and we are quite happy with the look. The Dora one’s white wording doesn’t show up like we thought it would so a new one with black rosalynandroy.com has been ordered. Roy also discovered after he put on the Dora one, and had bubbles he couldn’t get out. that it was best to spray the surface with Windex first. The Boots sign went on much smoother using Windex. The new one for Dora will get the Windex treatment first for sure! 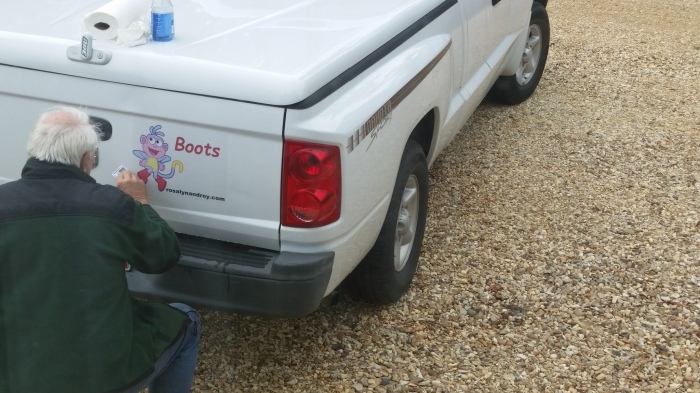 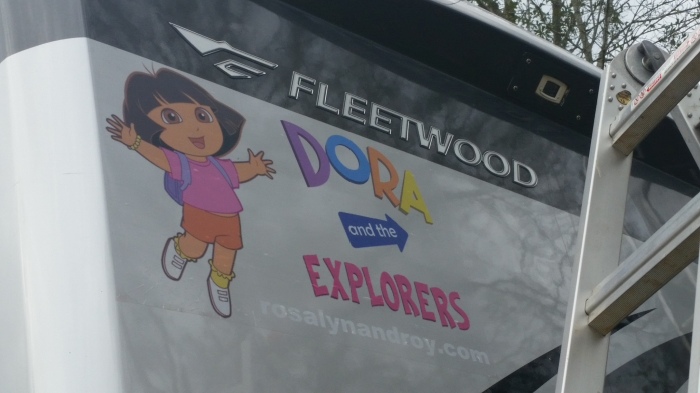 The water in our pond is the highest we’ve seen it. The water came over the culvert and almost covered the white bench on the side of the pond. 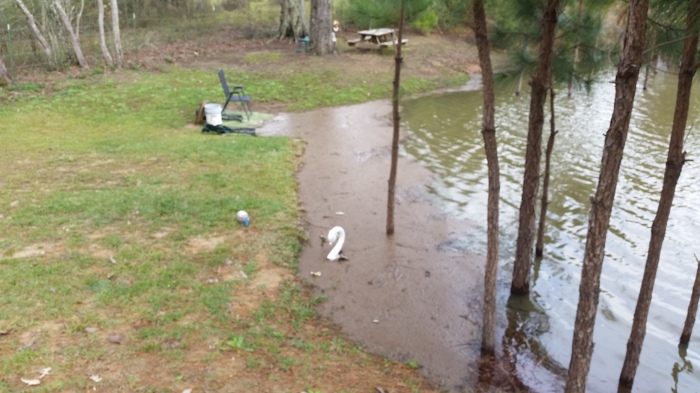 So that our flower gardens are left as nice as they can be, I’ve started pulling weeds and the tiny oak trees that seem to have grown a foot already from the acorns. That will take a few days to complete since there are many shoots of rye grass that crept into the gardens and will take over if not removed!

Another of Roy’s projects was to create a place on the back of the new storage door for me to hang my necklaces! He did and I LOVE IT!!! 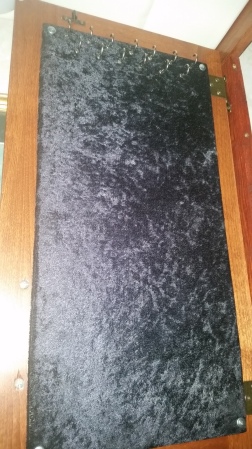 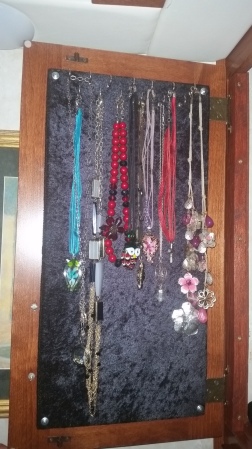 Last week I cooked two big pots of chili which are now frozen waiting to be served at Chip and Misty’s wedding reception. Madisyn, Kallie and her cousin Haylee are going to join me next week to make some more things for the wedding, including oreo cookie balls!!!

Roy has been shoveling wheelbarrow loads of dirt from under the storage building to fill in holes in the yard and by the pond. Not just 4 or 5 wheel barrows full of dirt, more like 20 wheel barrows full! He gets so into the digging that his foot slipped yesterday and now his right foot big toe is swollen and purple, possibly broken.

He’s in a lot of pain, but he’s keeping it elevated and protected. Please pray that he heals quickly!

This is not nearly all we’ve been up to lately but it’s all I can remember for now!!

You can start the year off right by “Following” our blog. To “Follow” our blog, enter your email address on the right hand side where you see Follow This Blog. Each time a new blog post is published, you will receive an email letting you know it’s available for you to view.