Saturday, April 23, 2016 –  Within 24 hours of us arriving home last Thursday Roy was digging holes in the ground!  He has a list of projects he wants to take care of while we’re home.  This was number one on the list!

When we are home, Dora is parked on the gravel pad we created for her.  Her heaviness causes the tires to sink down in the gravel which isn’t a good thing for Dora’s tires to sit on for any length of time.  Roy felt that by burying railroad ties a couple of inches inches into the dirt the tires would have a better base, for while we’re in town.

Roy started first by pulling Dora up to the front of our property and hole after hole was dug.  The holes actually looked like we were planning to bury someone!  But instead Roy planted railroad ties he bought from Abita Springs Lumber yard.  He bought four at first and then went back for five more a couple of days later.

The original railroad ties he buried several months ago around our RV parking pad started to move out an inch or so from the weight of the rocks being pushed against them when Dora is parked there.  I would have ignored an inch of movement but Roy saw it as a potential future disaster, so fix it he must!  I never mean to sound like I’m making fun of him but a wife finds humor in some things her husband does and I, of course, share them! 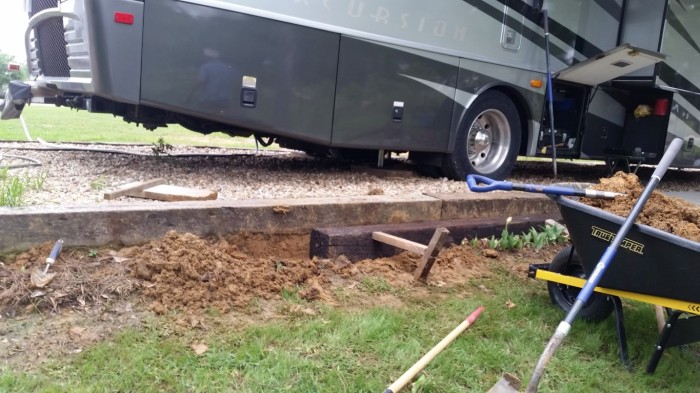 After digging out dirt and burying one tie next to the original ties he proceeded to pull Dora forward and dig two holes, one twice as wide as the other.  The two wide railroad ties were to hold the back set of four tires on and the single railroad ties are for the jacks that are lowered when we park to level us. 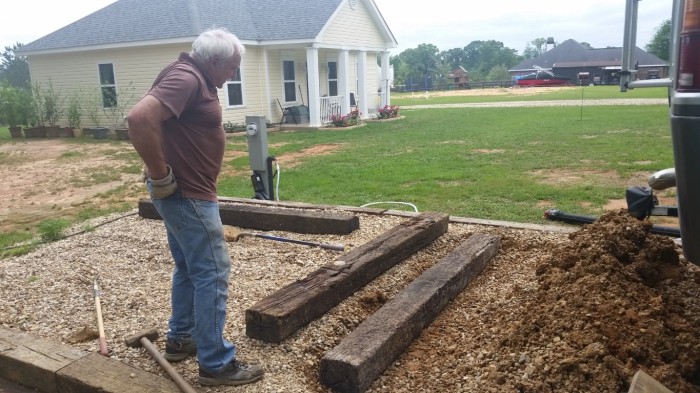 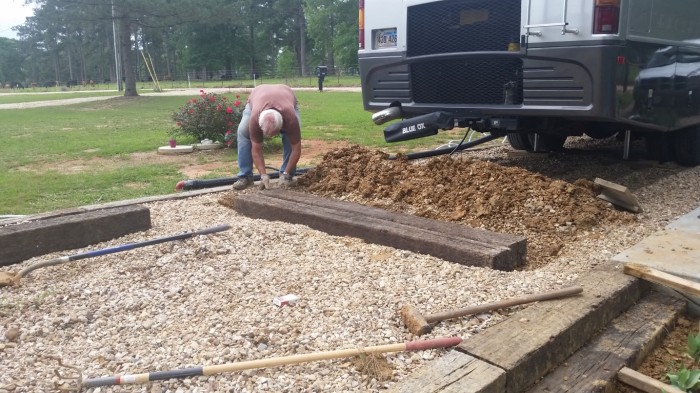 Our neighbor Kevin graciously offered to help Roy dig which was a lifesaver!  Not only did digging out gravel and dirt need to be done but then wheelbarrows of dirt needed to be dumped in the rear of our property where there is a hole that needed filling.  Pushing a wheelbarrow is one thing but when you have to go down a slope like we have makes it especially hard.   Thanks so much Kevin for giving of yourself to help us out!  You and Shannon are the best neighbors and renters we could ever ask for! 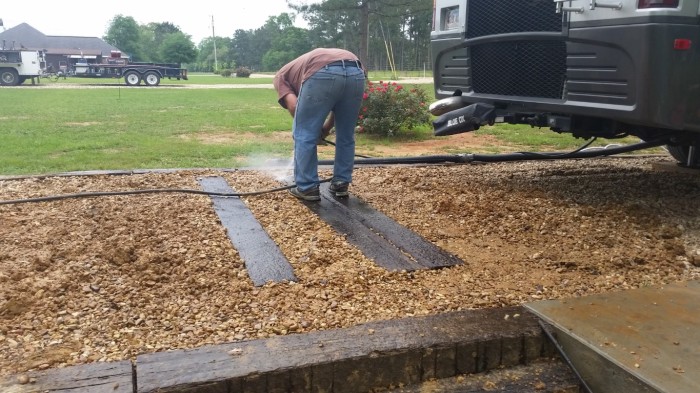 I’ll pause here before sharing with you the thrilling conclusion of this amazing tale to show you how brilliant my hubby is about moving these extremely heavy railroad ties around!  He said his dad taught him that.  Misty says our son Chip moves things around on the desk chair that has swivel legs.  Must be a Chauvin man thing!

Okay on to the good stuff!

Back to the lumber place he went, coming back with the last five (I’m really hoping it’s the last ones)!  Dora gets moved way back on the pad till her tail is hanging over the end.  This happened with all the slides out and me still in bed one morning!  I knew when I didn’t roll off the bed on the side that he didn’t go over the edge and went peacefully back to sleep!

Another large hole and one half that size was dug for the front tires and jack. 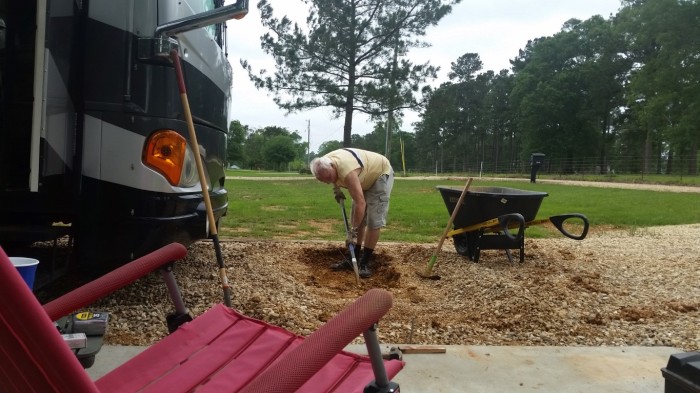 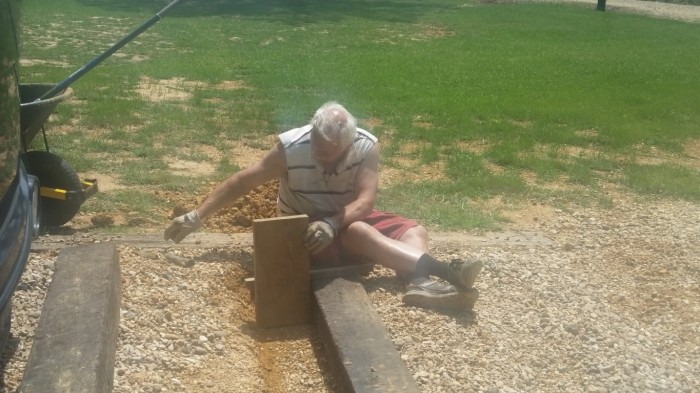 One of the railroad ties was sawed into two pieces.  One piece was put at the end of the first tie that was buried so it would match the original ties length.  Same on the opposite side. 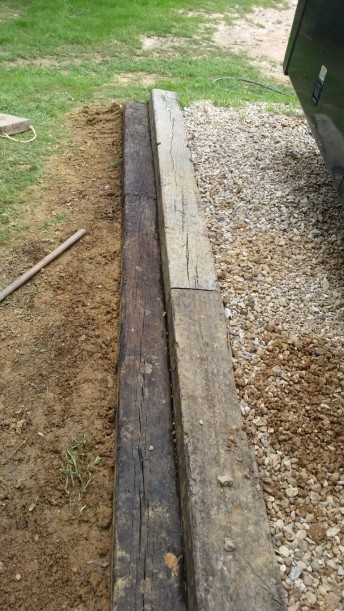 THEN…….  Roy realized that the spacing of the two ties and the one tie in the back was off by enough that the jack didn’t sit correctly on the single tie.  Digging began and it got moved! 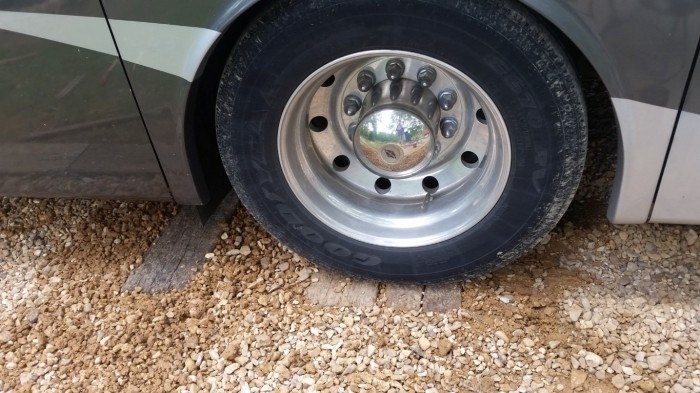 That’s one project Roy could scratch off his list.  Next he goes onto several more projects which I’ll entertain you with as I find time to write! 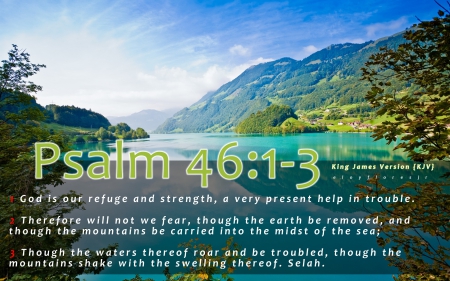