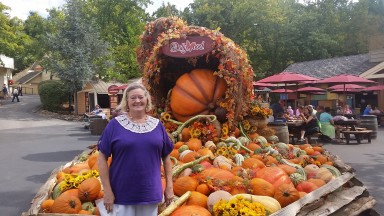 The atmosphere at Dollywood was warm, friendly, inviting and unmistakably Christian.   I expected country and was pleasantly surprised at the Christian part.  When riding the locomotive they piped in a couple of Dolly’s Christian songs and most everyone was singing along at the top of our lungs!!!  Riding through the Tennessee countryside, singing praises to our Lord was amazing.  All through the park either Christian music was piped in or live Christian Gospel music was being sung and played.  I was singing along and saw soooo many people walking by singing the words to the songs!

Now on to Day 2 at Dollywood which was totally different than Day 1. This post is long, too much fun and adventure not to include an abundance of photos and lots of descriptions.  Hang on now!

We rode roller coasters even flipping upside down, water rides, an absolutely sickening swing ride, and listened to a couple of great Gospel music shows then finished it off with a delicious buffet at Aunt Granny’s in Dollywood!

When entering the park we turned left instead of right like we did on Day 1.   A long winding pathway took us to the part of the park where the mega rides were located.  Along the way Roy found a coffin he had to try out, hence the photo below!  Yes, creepy but it made him happy!

We first stopped at the Dolly Parton Celebrity Theater to watch the Hoppers.  The young lady singer sounded so much like Dolly herself.  The whole group sang some amazing songs.  Great way to start of the day, singing Praises with other Christians!

The decorations throughout the park were really cool and old country.  Even the bathroom was called The Privy! 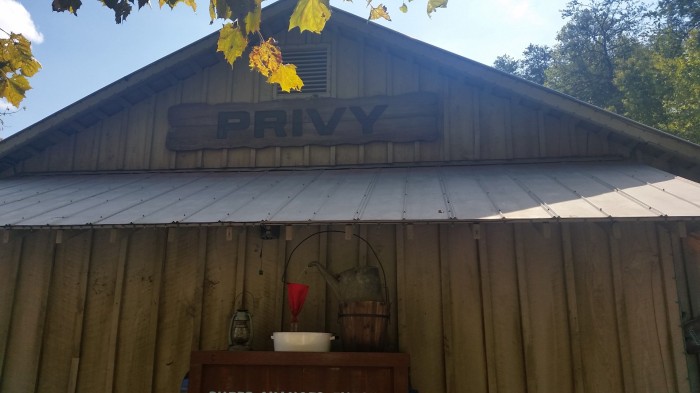 First ride was on the wooden Roller Coaster called Thunderhead

What a wild experience that was hearing the cars go over all the wooden parts featuring a 100-foot drop and a top speed of 55 mph.  What a wild, exhilarating ride that was!  I handled this one well and was quite happy we experienced it. 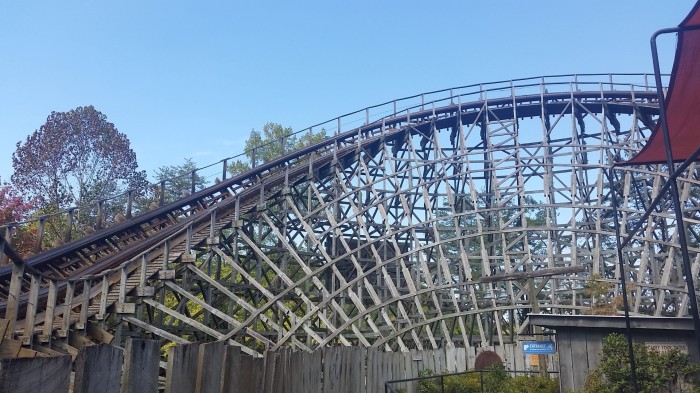 We walked through the park some more.

When we got to the Mystery Mine I thought I previously read that it was a nice little ride through a mine.  Well no, far from it!

This is what it was, upside down, twist over and over high speed fun.  Yes, I said fun!  I was starting to think I could actually handle these speedy, wild and crazy rides.  Its 1,811-foot track travels through an abandoned coal mine.  Uncertain encounters and amazing maneuvers, including a hair-raising 95-degree, 85-foot vertical drop that plunges into darkness! 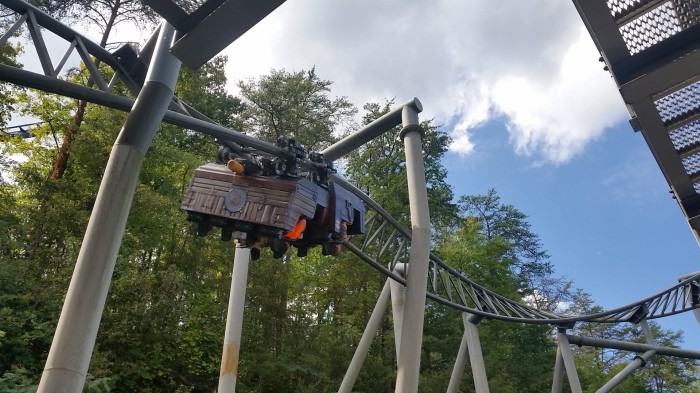 This is one of those pictures they take during the ride that they try to sell you after the ride.  This was so descriptive of our experience I had to buy it.   Roy obviously did way better than I did!  I hung on tight for dear life and survived!

This was a cute, very descriptive little diddy about the ride! 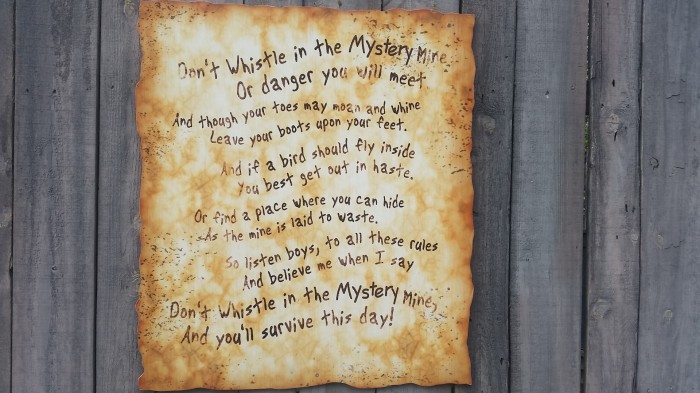 We strolled around some more on our way to the Eagle, the highest ride in the park.  Here’s what we found when we got there.

This one is for Madisyn and Kallie!  Paw Paw, the kid at heart!

I thought this was a beautiful way to spruce up a plain retaining wall. 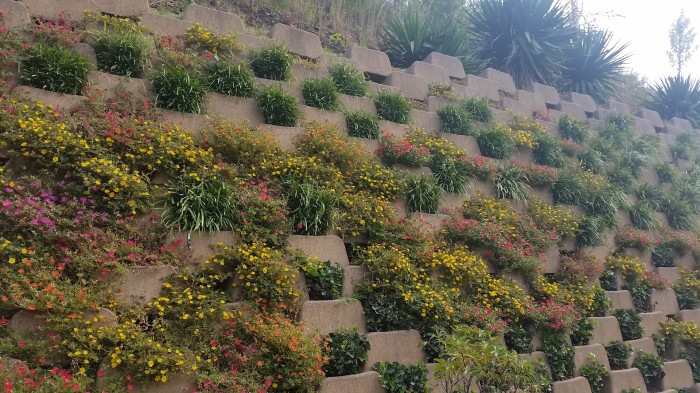 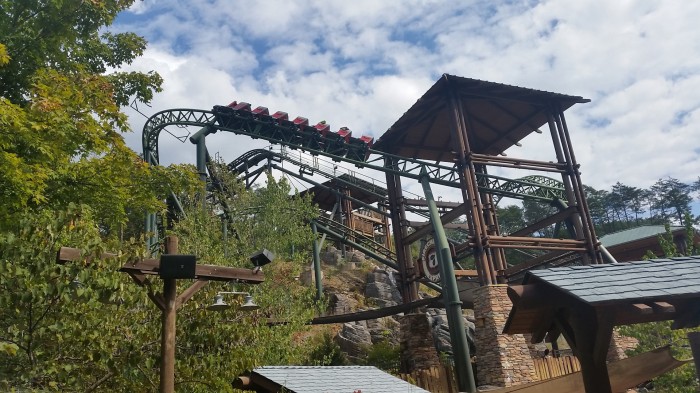 Then we came to a replica of an old school house from 1901.  The children seeing this were just amazed, I was too!

The old chapel in the woods was another treat to see.

During our stroll through the park we came across a spot where all the old folks were rocking.  We joined them for a spell.  I think every town should have a space like this, just for us!

Okay, well now comes the ride I would like to say a lot of really awful things about.  I guess my confidence in handling these rides got so strong that when I saw the Barnstormer ride I thought wow, fun.  Roy told me to watch it for a while and see if I really wanted to ride it.  I watched it, still looked like great fun, even with the screams coming from the riders as it swung higher and higher.  I could never have been wronger (probably not really a word). These first few rather lame photographs do not IN ANYWAY prepare you for the evil that lied ahead. 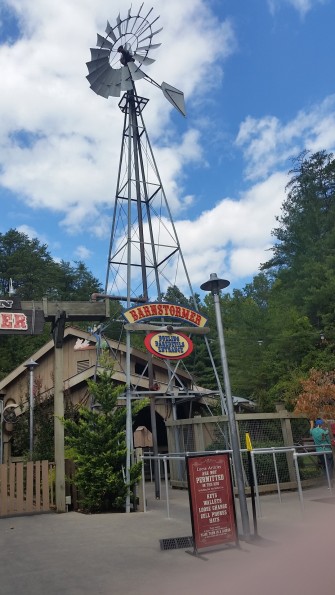 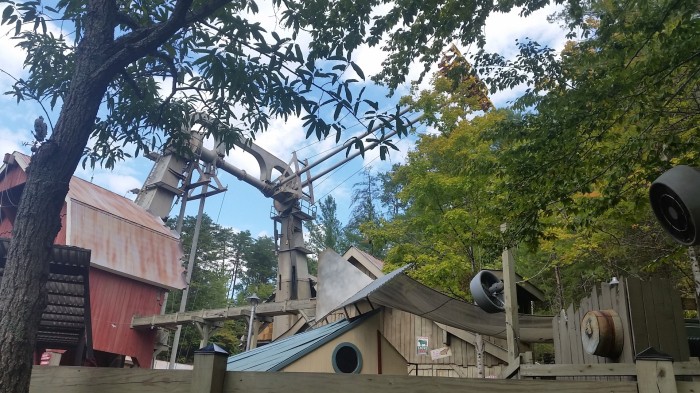 You can’t take pictures while on the ride, or evil event as I would call it, so here are a couple I found.

I can just picture my sister, Harriett, closing her eyes and saying “Rosie, you did do this, did you???”  She’s obviously the wise one of the two of us!  Even though I am getting older I’m still pretty determined not to let that stop me very much.  Today I wish it had.

Not to get to descriptive but I had to sit still hoping not to throw up for at least 30 minutes afterwards.  If the landscaping wasn’t so pretty there I would have given in and done it.  My stomach had gone back and forth, and upside down a few too many times.

After a nice rest and some retail shopping therapy we went on with our adventure. One area of the park took us back to the 50s where drive ins and fine old cars put a big smile on our faces. 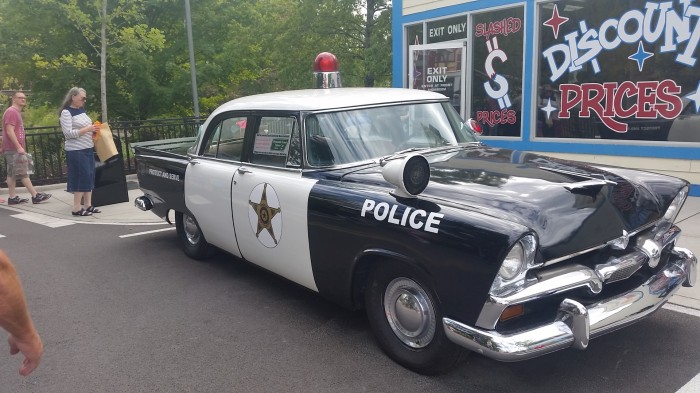 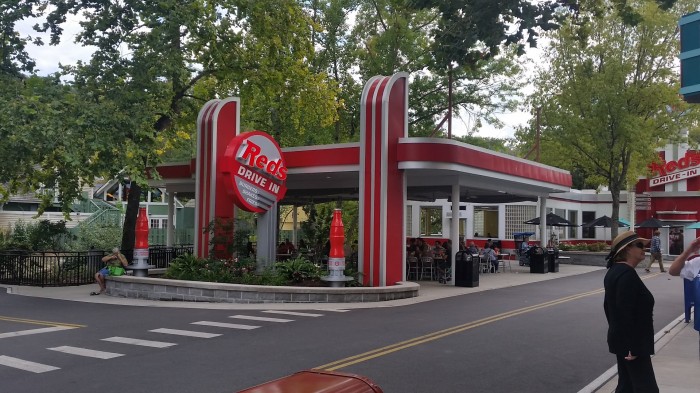 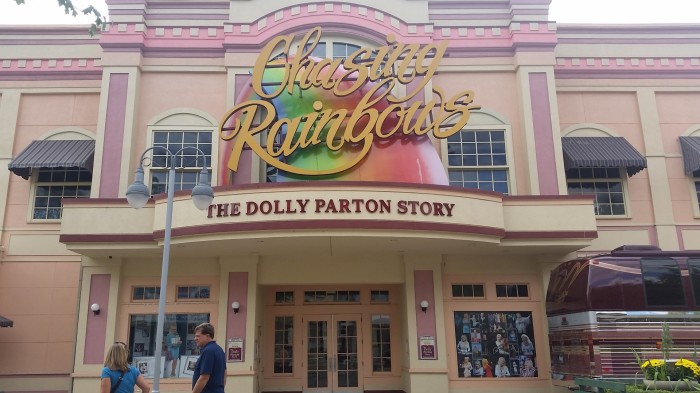 Dolly’s older touring bus was in this area and we got to tour it today.  The 1994 Prevost features hand-tooled leather from Germany on the sofa and chairs, cherry cabinets and brass fixtures. In addition to three bunks, the bus has two bathrooms and a shower. Dolly’s bedroom features three clocks–one set on Los Angeles time, one on Nashville time and the other on Dollywood time.  Back then this cost $700,000.  Her new one was a piddly $2.5 million dollar bus!  Here’s a photo of the inside.

We then went over to the River Rampage. This white water rafting adventure is full of exciting dips, twists and turns along the way. No two excursions are the same, but each one promises a good soaking for all who dare to brave the rapids.  Roy doesn’t like rides like this but he braved it for his darling, me!  Again no photos on this ride so here’s some I found elsewhere.  We were dripping like rats at the end of this one.

We eventually dried off and continued exploring the park.  I walked up on Roy with this duck.   When I first walked up he was facing Roy and they looked like they were having a good chat! By the time I got my camera ready the duck was walking away. 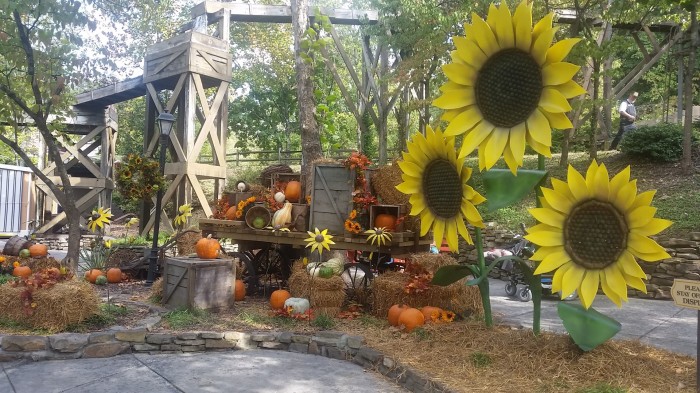 The Joyaires were the next group we enjoyed at the Back Porch Theater.  They ended their program with a patriotic series of songs that almost had me in tears.  God and my country are very important in my life and the combination in one show was amazing! 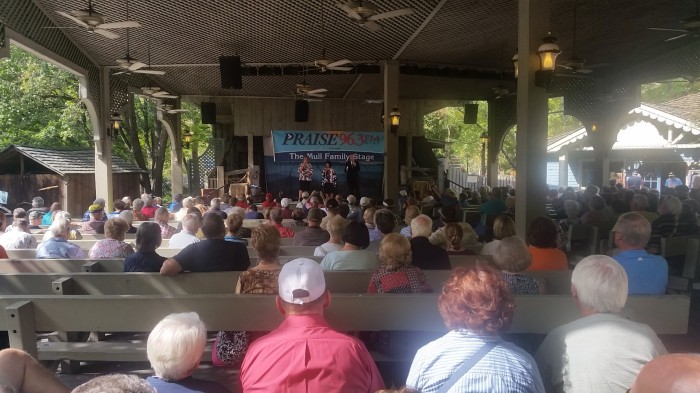 Enough time passed since the evil ride and the River Rampage that we were able to enjoy Aunt Granny’s buffet for our diner. 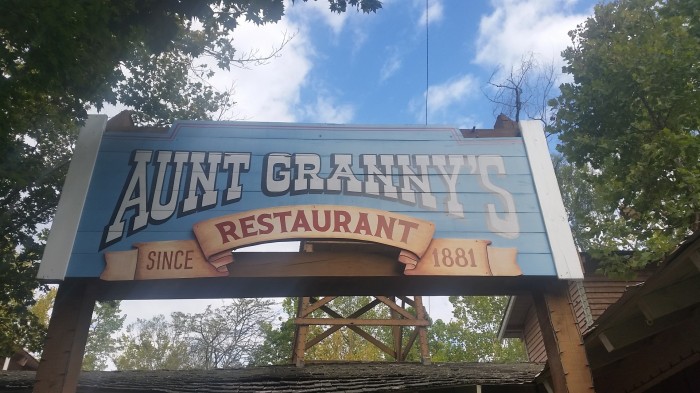 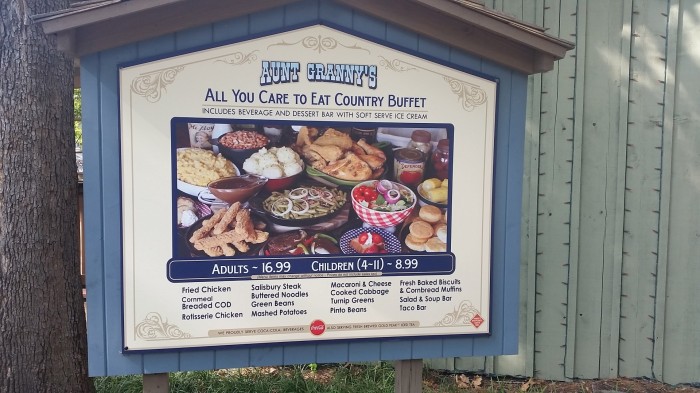 That was a long one, sorry!  But we enjoyed the adventure (most of it) so much I had to share.  If you’ve never been to Dollywood, I recommend giving it a visit.  It is not as expensive as Disney, nor is it as sparkly shiny and clean, but the over all experience was terrific! There was sooo much more to do and see at Dollywood than this.  If you take your time and enjoy doing all of it, you can easily spend 3 days here.

On Tuesday we went into Pigeon Forge seeing the Bush’s Beans factory, visited a craft fair while going through downtown Pigeon Forge.  We ended our time there at the Apple Barn……………… yum!