Thursday, September 28, 2017 – Cadillac Ranch in Amarillo, Texas is much more well known than the VW Bugs are and it is very different.  All photos I’ve seen, showed the Cadillacs as though they were right  by the road like the VW Bugs and it was all dry around them like this photo. 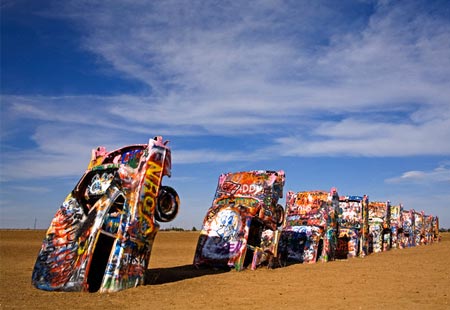 It stormed the day before so they were ankle deep in water and were actually far far off the road like you’ll see in the first photo. 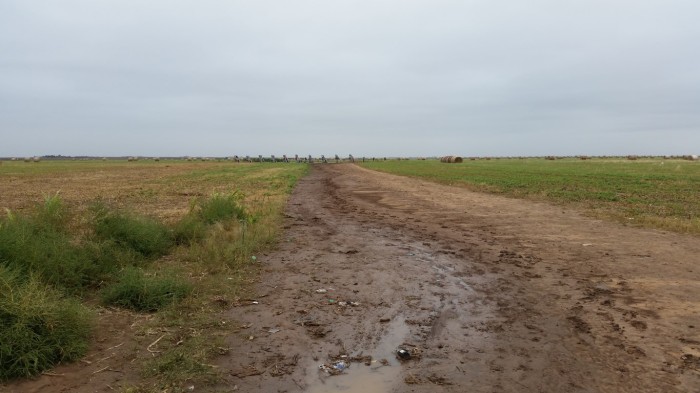 We saw around 20 people coming and going while we were there.  Most all of them except one young man and MEEEEE didn’t go into the freezing muddy water to paint on the Cadillacs.  They resorted to painting on the ground which I did also! 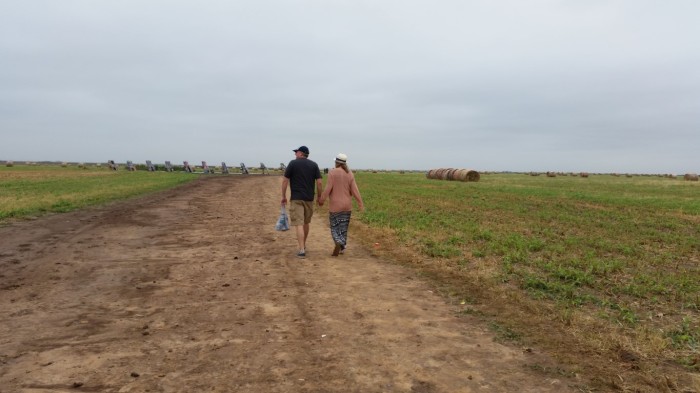 Here they are as we walked closer and closer to them and around them! 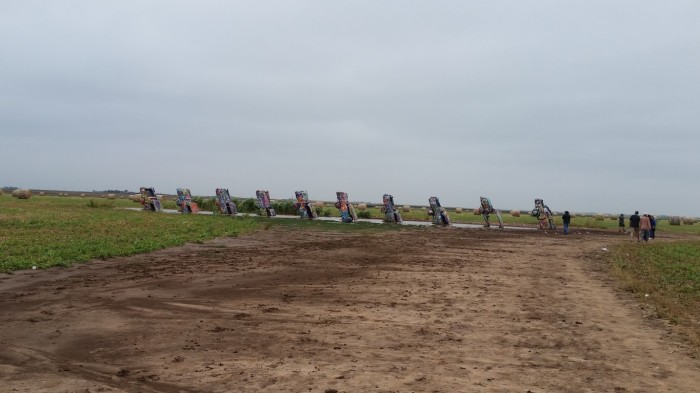 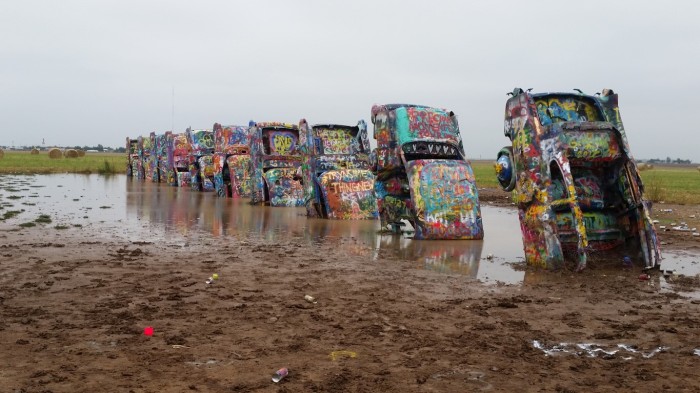 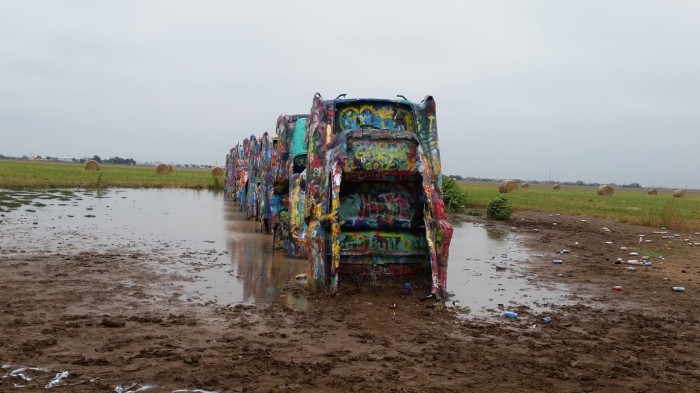 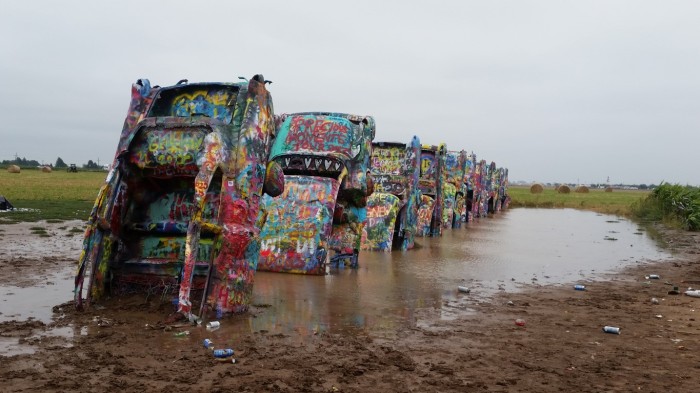 I have wanted to see these things for the last three years and I was determined to get some spray painted on them.  I sprayed Roy, Rosie and the first initial of our six grandchildren’s names  K E M J C G.  Kallie, Ella, Madisyn, Jacob, Caroline and Gracie. That’s in the order of their ages! 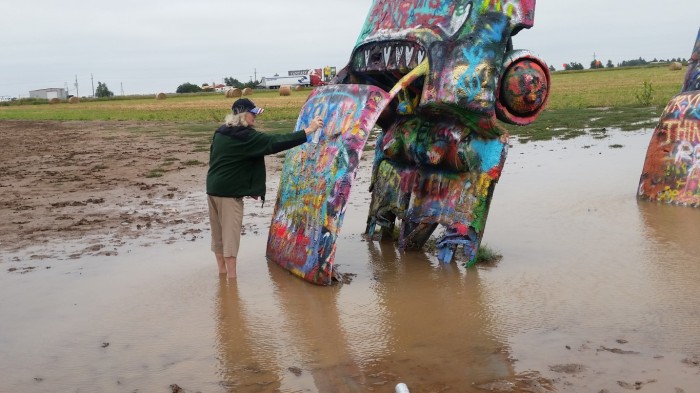 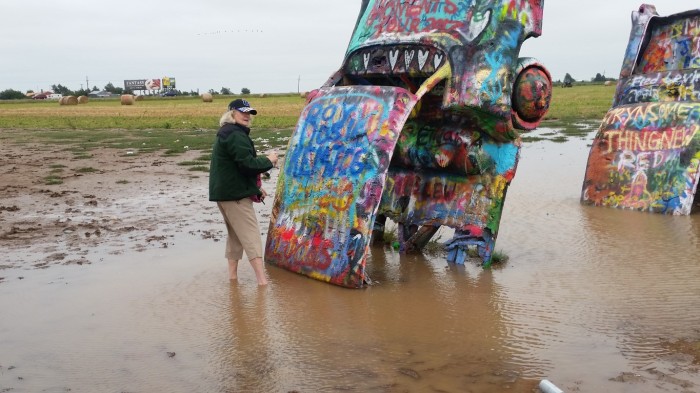 This video is when I’m telling Roy that the initials are the Chauvin grandchildren.  You can hear how strong the wind is and may not be able to hear me explain that!

The muddy water sucked my shoes in with each step so I slowly, slowly walked out determined not to fall flat on my face.  I was very proud that I achieved that! 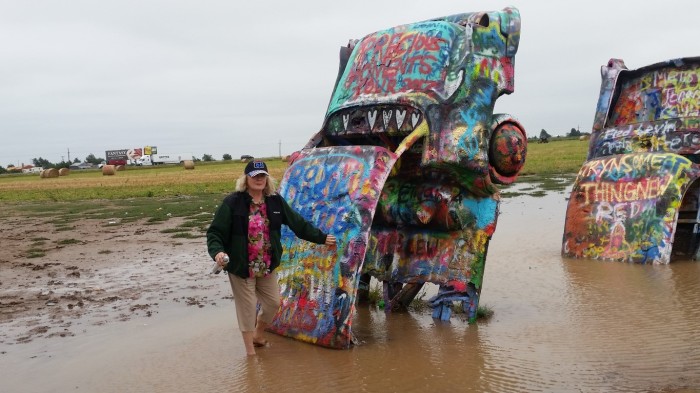 I wore these shoes because they already needed to be thrown away.  I brought a good pair of shoes to change into when we got to the car. 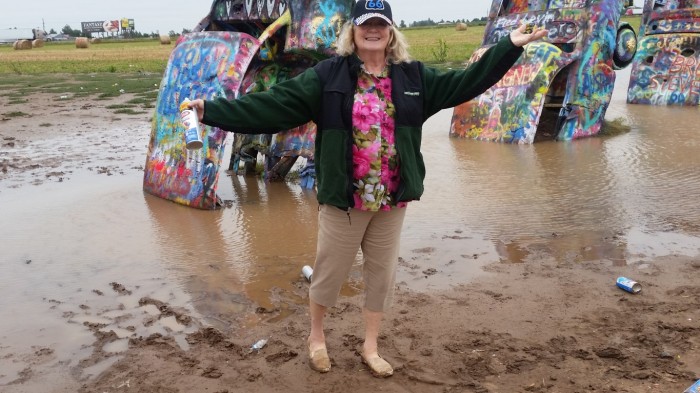 This is the other person who painted and even he didn’t go very far into the watery mud. 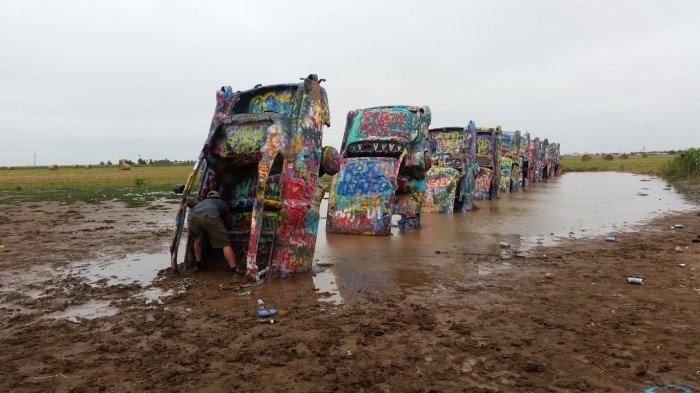 I painted the grandchildren’s initials on the ground as well so it could be seen better.  Pretty sure with the next rain this will all be washed away. 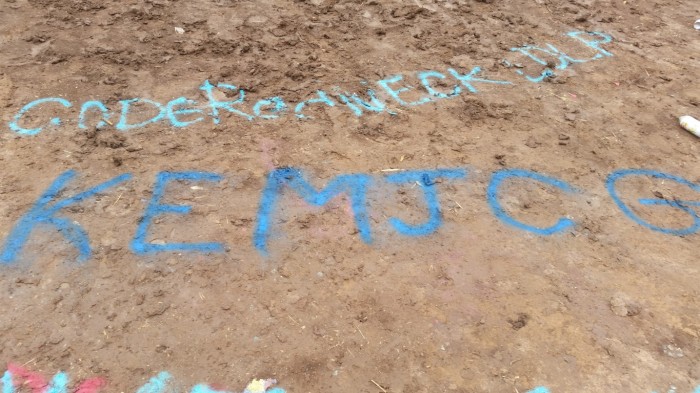 Bales of hay along the walking way were sprayed as well. 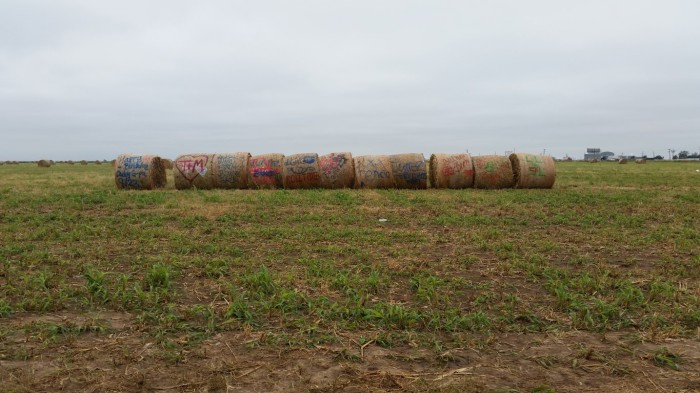 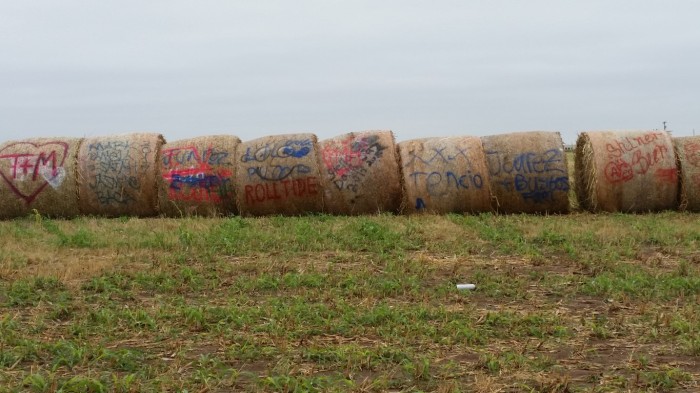 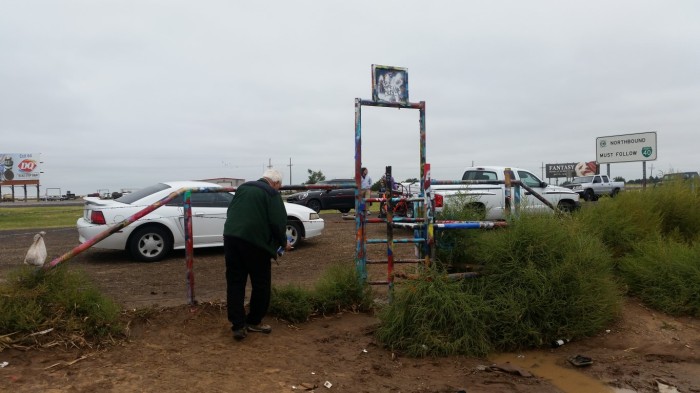 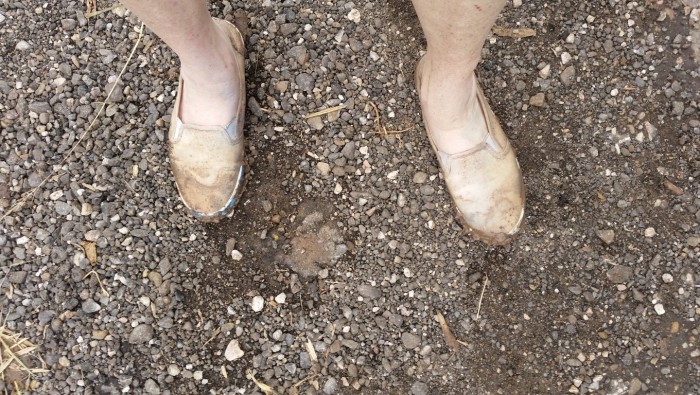 Here’s some information I found to share: Cadillac Ranch is a public art installation and sculpture created in 1974 by Chip Lord, Hudson Marquez and Doug Michels, who were a part of the art group Ant Farm.

Cadillac Ranch was originally located in a wheat field, but in 1997, the installation was quietly moved by a local contractor to a location two miles to the west, to a cow pasture along Interstate 40 (which is Route 66 in a lot of places) in order to place it farther from the limits of the growing city. Both sites belonged to the local millionaire Stanley Marsh, the patron of the project.

Cadillac Ranch is visible from the highway, and though located on private land, visiting it (by driving along a frontage road and entering the pasture by walking through an unlocked gate) is tacitly encouraged. In addition, writing graffiti on or otherwise spray-painting the vehicles is now encouraged, and the vehicles, which have long since lost their original colors, are wildly decorated. The cars are periodically repainted various colors.

If you are ever anywhere around Amarillo, I highly recommend going back to your childhood and painting on one of the Cadillacs or a bale of hay or the ground!

After spray painting (I call it graffiti) on the VW Bugs and the Cadillacs we headed over to the Big Texan Restaurant for a delicious meal.  More on that next time! 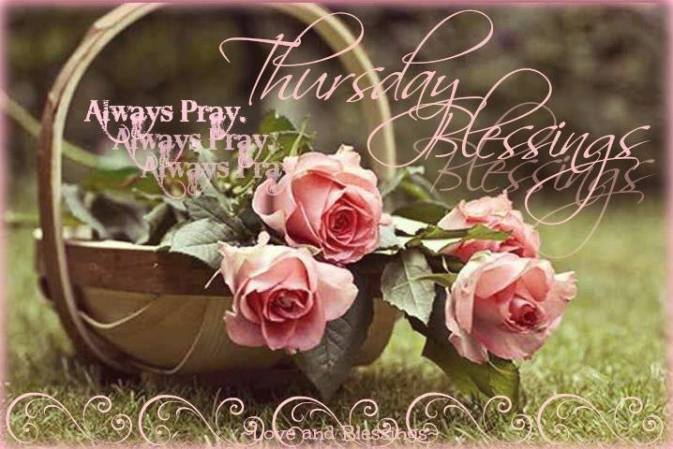