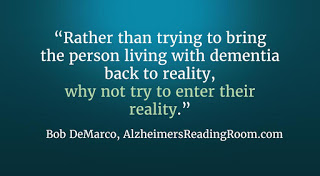 Tuesday, March 20, 2018 – I’ve written about how while Mama lived with us, the last few months we’d live in her bizarre little world.  She was not the mama I grew up with, nor the mama I’d known during my adult life.  Some times “my mama” would come out, but most of the time her world and ours varied widely from each other.  She’d talk about people long dead that were coming to visit or she wanted me to check on. We’d answer just like saying something that made sense and went along with what she thought was reality.  She thought we were the “couple who lives upstairs” and cooked for her (often it was food not fit for a dog, she’d say!!)  This article from Bob DeMarco, founder of AlzheimersReadingRoom.com explains that same concept, he just calls it Alzheimer’s World.  I’d call it Dementia World or the bizarre little world of the patient.
I am pleased to say I don’t have a bizzare little world I live in yet!!!
We celebrated Kallie (our teenage granddaughter’s) birthday Sunday.  She’s 17 now!!! 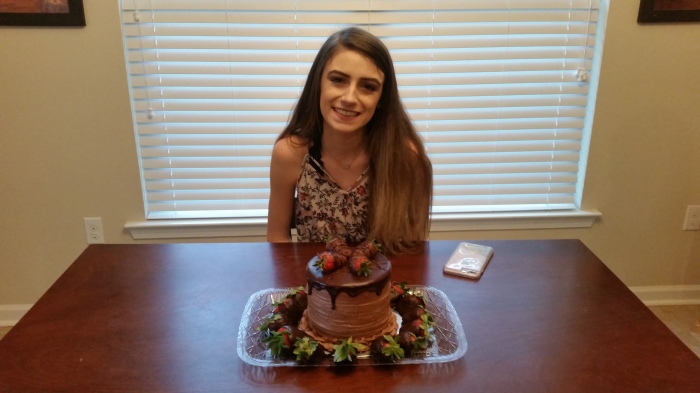 Roy has suddenly become quite busy with computer work and flooring work.  What we thought was going to be a quiet non eventful week, this week, has blown up with fun and other frivolities!  Roy is doing this work for a specific reason which we’ll share soon!
Madisyn’s school class had a field trip to Liuzza Land yesterday (Monday).  I went with Chip and her class and LOVED IT!!!  More on that in our next blog post.

You want to decrease both your stress as caregiver, and the stress of the person living with Alzheimer’s disease.

You want to change for the better — you want and need to change the way things are.

After repeatedly correcting my mother, telling her she just ate, and watching her get frustrated or angry, I finally realized something had to change and that something was me.

You might be wondering why I just repeated myself. Why? Because I believe it is necessary to get focused on what you want to accomplish, if you ever expect to accomplish.

It must become a deep and strong desire within you.

For example, my mother, Dotty, continually tells me she is hungry. She does this repeatedly, just minutes after she has finished eating lunch or dinner. When a person says something that doesn’t make sense the natural tendency is to correct them. In this case, I would remind my mother over and over that she wasn’t hungry because she just ate.

Ever done that or something similar with a person who is deeply forgetful – raise your hand?

After the thousandth or so time of correcting my mother, telling her firmly she just ate, and watching her get frustrated or angry, I finally realized something had to change — this something was me.

I had to change.

Why is it so hard to understand and accept they can no longer store the memory of what was just said, or what was just asked? They cannot store the answer to the question you just answered in memory, so they just keep on asking the same question over and over.

Like you and me, the deeply forgetful ask questions. The questions come from a different part of the brain then the part that is sick.

What you believe to be true, and what the person living with Alzheimer’s believes to be true are often diametrically opposed. The exact opposite.

Here is the one thing you need to understand.

Your view of reality and your loved one’s view of reality might be very different. This occurs because their brain is sick and they can’t remember simple things that are easy for you to remember.

Ask yourself, what are you doing and how are you reacting when someone living with Alzheimer’s says something you know to be incorrect or untrue?

What are you feeling when this happens? Are you constantly correcting them?

If you are constantly correcting a person living with dementia are you also experiencing enormous feelings of frustration and stress?

When you correct them do you you start to feel angry, stressed, and/or disconcerted?

Sooner or later you must make a decision.

This isn’t easy to do, but it is necessary — you need to start accepting that when a person who is deeply forgetful says something they believe to be true it is in fact a reality for them. It is their reality.

When they continually repeat themselves they do it because they can’t remember. There is no sinister plot here. Brain sick, Brain not functioning properly.

Don’t be afraid or reluctant to step into this new and very different world.

In Alzheimer’s World, reality takes on a different shape.

Reality in Alzheimer’s World is a reflection of what the person living with Alzheimer’s thinks and believes. It is this reality that you must focus on, not the way YOU think things are, or should be.

When you do this you are asking the person who is deeply forgetful to come back into your world. They cannot do this.

Think about what I am saying here.

This isn’t easy. It could be one of the hardest things you ever try to accomplish.

Even though I was well aware of what I needed to accomplish, trying as hard as I could, it still took years to get there — to get into and comfortable with Alzheimer’s World.

Once I made it into Alzheimer’s World I reaped rewards that are hard to describe.

When you make it to Alzheimer’s World you begin the process of redefining reality. Instead of trying to brow beat your loved one back into your reality, you start to interact with them based on their view of reality.

For example. When my mother said, I am hungry, I’m starving — I said OK, we will eat in a little while. Instead of telling her — you just ate, you can’t be hungry.

Instead of an argument, my mother now reacts positively to this response.

Over time, my mother started saying something she never said before, instead of saying I’m hungry, I am starving, she sometimes says — Bobby, what did I eat today?

When I answer by recounting our meals, she still makes a funny face, the face of disbelief, but she doesn’t get angry or upset, and neither do I.

When I recount to her what she has eaten I have to be very careful. Careful to tell her with a smile on my face, and in a low calm voice. Not like a lecture. If she gets that bewildered look on her face — confusion — that is OK because I can then change the topic.

On the other hand, if I allow my mother to get angry and disconcerted then she will start going into the black hole of Alzheimer’s World.

By listening to her lament — I am hungry, I’m starving — and by responding to her reality rather than correcting her — the communication between my mother and me has improved. The amount of anger, stress and angst is greatly reduced. On both sides.

This new form of communication leads to the reduction of stress, anger, and angst. It seems to have a cumulative effect. Less stress build up across a series of situations, leads to less anger and nutty behavior from my mother.

The goal in all communications with a person living with Alzheimer’s disease should be to connect with the patient in a positive, constructive, effective way.
So instead of telling my mother — you just ate. I accept her reality that she is hungry and respond in a positive proactive way.

What you want to be doing here is trying to establish a positive pattern of communication.
This requires you to develop calm, effective responses that are easily accepted by the person who is deeply forgetful.

By establishing positive patterns of communication over a series of situations you learn how to deal with the new reality that is at the core of what I call Alzheimer’s World.

The more you practice the better you get at it.

Before you know it, Alzheimer’s World becomes another dimension in your life. You learn how to operate effectively in this world. Instead of a sinister confusing world it becomes a parallel universe.

The place you go to when you want to communicate with someone living with Alzheimer’s disease.

Once you learn how to do this you start communicating in a way that works for both parties — the caregiver and the patient.

I feel very confident when I say this. While a person living with Alzheimer’s can’t remember, they are full of feelings and emotions.

As a caregiver, when you try to correct a person with Alzheimer’s you are likely to bring out a negative emotion in them. How would you like to be told over and over — you are wrong?

How would you act? What emotion would you be likely to express?

Would you like the person that is constantly telling you — you are wrong?

I’ll let you decide the answer.

Effective communication with someone living with Alzheimer’s requires you to identify the emotion behind the persons words. To learn ways to address what they are feeling and to validate those feelings.

Right now, it is likely that when a person living with dementia says something that is opposed to reality — as you understand it — that you immediately feel an urge to correct them (or worse).

You aren’t listening when you do this. You are making the situation about you and your feelings — not about them.

You are trying to drag the person into your world — this is unlikely to happen and it rarely, if ever, works.

You want to avoid any and all situations that lead to an argument.

When an argument ensues it is likely that the person who is deeply forgetful gets agitated and says those mean and angry words you dread.

Instead of creating a secure, safe, calm environment you are perpetuating a state of agitation and angst. When you do this it only gets worse over time. Not better.

Ask yourself, is this what you want to accomplish? Who is at fault? How can this dynamic be changed?

If you are caring for someone with Alzheimer’s you will need to go into their world — Alzheimer’s World.

The first steps are to start listening to what they say. To accept what they are saying as a “reality”. They believe it to be true, why can’t you?

Understanding that Alzheimer’s World’s reality is different — is a big and important step. A necessary step to communicating effectively with someone that is deeply forgetful.

The person living with Alzheimer’s would adjust if they could — they can’t.

I want to close by giving you this construct. I often think of my mother and myself as two magnets. Every magnet has two fields — a north pole and a south pole.

If you put the two north poles together (or south poles) the two magnets will repel each other.

If you put the two opposite poles of a magnet together they will attract each other. They will stick together (like glue).

Once you learn to put these two opposite poles together your life as an Alzheimer’s caregiver will change. On the other hand, if you keep trying to put the same poles together they will continue to repel each other.

This is a very pleasant and rewarding way to feel.