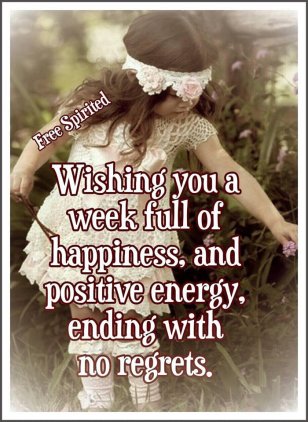 Gardening is difficult when the weather is as hot has it has been.  The high today was in the high 70s so right after church today I spent several hours crawling around and working in our main vegetable garden. Pulling weeds has been difficult because the garden was so full. All weeds and dead leaves are now gone!  They will come back though! 😦  Many of the vegetables really needed tying up higher to the tall stakes and that was done today. Dirt gets washed away exposing the roots as time goes on so each plant got a fresh mound of dirt over the roots.

A lot has changed since I wrote last and we are transitioning to the Fall garden now.

While I worked in the garden Roy spent the whole afternoon assembling a square picnic table for family and friend gatherings.

My husband doesn’t do anything half way.  He could have assembled the picnic table and bench and walked away.  But these concrete squares are to go under each corners legs so it doesn’t sink into the ground and get uneven.  I’m already planning how to make that area down by the pond into something pretty where we’ll like to visit! It’s pretty far from the house but has a beautiful view of the pond!

Now to the garden. One thing we’ve learned is that we are either really not good at growing watermelons or the locations we’ve planted them in is no good.  We’ve had at least a dozen watermelons start to grow on the vines.  All but three withered up and died.   Two of the three are little and round, about two week old watermelons.  One got fairly large before we discovered it had been either eaten into or somehow went bad.  We’ve both agreed this may not be something we grow again next year.  After cutting off the bad part of the fairly large one, it was quite delicious.  I think we’ll get about three bowls full of watermelon from that one. I’ll leave the vines growing just in case a miracle happens and we get another nice size one! 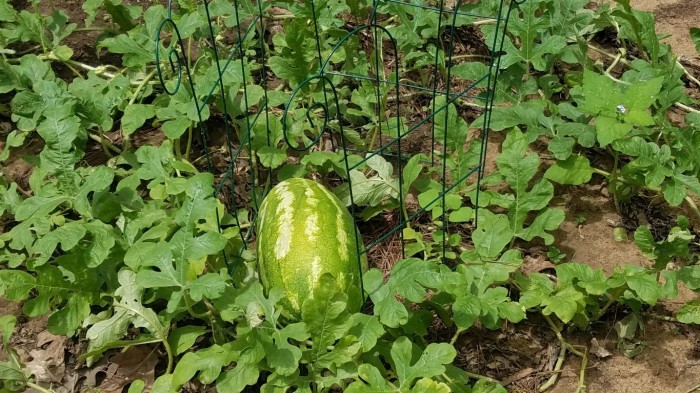 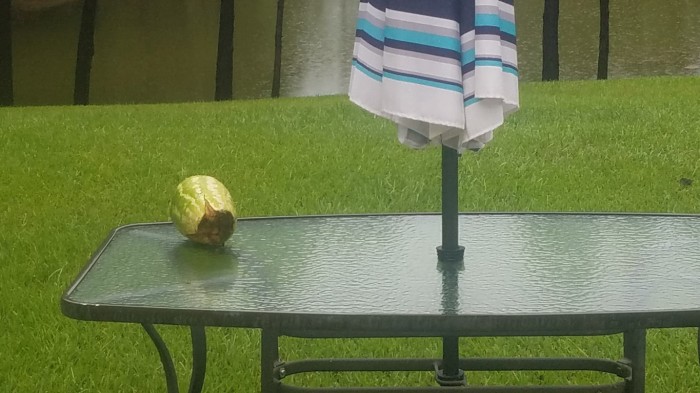 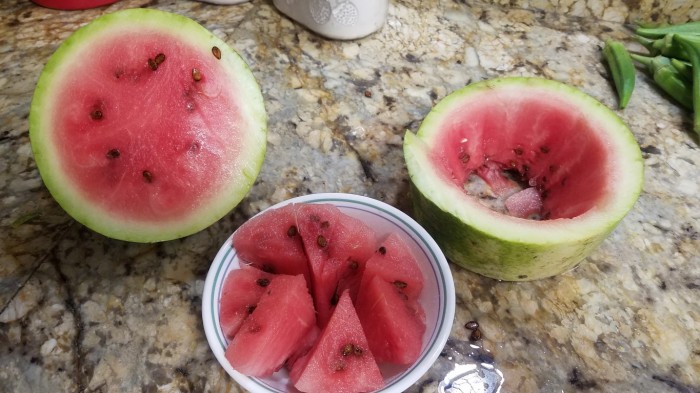 We are proud that we grow okra really well.  Every day I cut at least one nice size okra from each plant.  Now that new branches are growing from near the bottom and okra are growing from there we have maybe 3 okra pods to pick from each plant.  I’ve shared okra, frozen sliced okra, cooked smothered okra, pickled okra, and boiled okra.  Every way I’ve fixed them has turned out great. The top of the okra plants are now around 7 feet tall.  I have to bend them over a lot to reach the top to snip off the okra pods!  Two of the plants have grown all the okra they are going to grow so I’ve cut them down to just above where the new bottom branches are growing. My smothered okra recipe will be included in the next blog post.

These tall scrawney okra plants are great producers.  You can see the yellow flower at the top and a flower near the bottom on the same plant where the new crop have started. 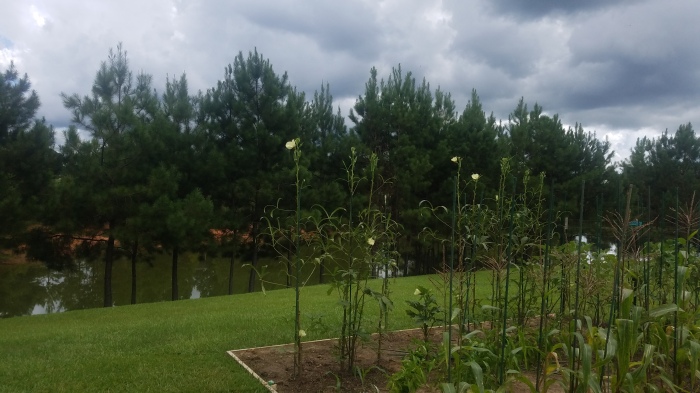 This one small okra plant is a different variety I tried this year from seed.  It’s the only seed of that variety that actually turned into a plant. It took longer to start producing but about a month ago it started producing an okra pod each day.

These are some of the lower branches that are now producing okra.

A pot of smothered okra and a pot of fresh potatoes

Bell peppers are another vegetable we grow well.  I’ve stuffed dozens of bell peppers. I also chopped up a lot of bell peppers and froze them.   I don’t know if it is our soil or the type of bell pepper seeds we grew we’ve grown but they don’t seem to get as big as the ones in the grocery.  They are however very tender and quite delicious! They are still producing quite a few in what I call their second season. This is a vegetable we will grow again. My stuffed bell pepper recipe will be included in the next blog post. 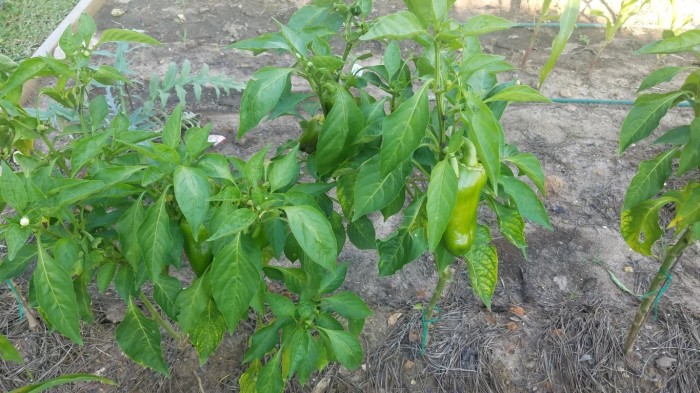 All of the sweet potatoes have been dug up.  The first batch stayed in the house for two weeks and then the storage shed for two weeks after digging them up.  They are now ready to cook.  Their shape is not always like the ones in the grocery. However, I’ve watched several videos about growing sweet potatoes and have found that other people have funky shaped sweet potatoes in their home gardens just like mine are. The second batch lived inside for a couple of weeks and have just been placed in the storage shed for the next two weeks.  I’ll let ya’ll know how the first batch of sweet potatoes tastes when they are cooked.  We’ve agreed we won’t be growing sweet potatoes anymore.  A lot of work and a lot of space for not many results.

This is the first batch that are ready to cook. 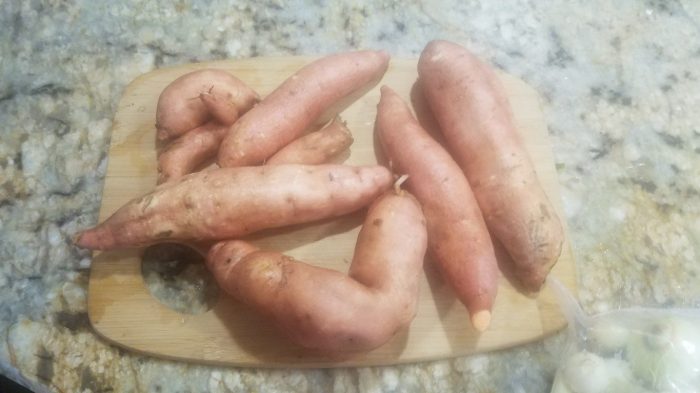 The second batch that will be ready after spending a couple of weeks in the warmth of the storage shed.  Aren’t they the weirdest shape things!?

Our cucumbers are still producing. We’ve picked around 60 decent sized cucumbers so far. About a dozen cucumbers were yellowish in color as they grew.  They were delicious even though the cucumbers were yellow-skinned.  I’ve planted seeds three times since this planting season started.  The vines are sometimes strong and sometimes weak.  I learned I’m not great at pickling the cucumbers.  They get very soft though they taste okay.  I’ve fixed them a couple of different ways.  It’s a lot of work for something that doesn’t turn out great. 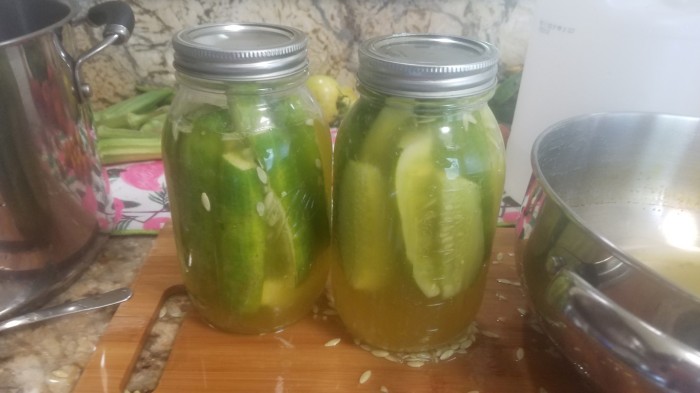 Roy’s new creole tomato plants are all producing at least one, some more.  Can’t wait for one to get ripe and taste it!

The original two rows of tomatoes are down to one plant! That one plant has one tomato on it and when that ripens we’ll pull it up. 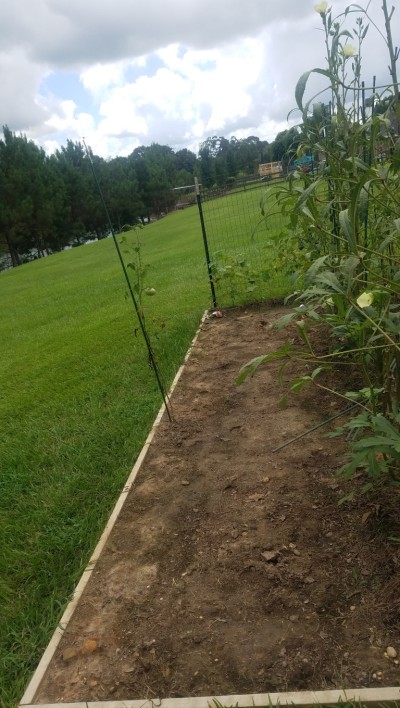 The two rows above where those tomatoes grew will be planted with the cauliflower, broccoli, and brussel sprout plants that are almost ready to go in the garden.

The corn seeds planted about a month ago are growing well and most all have corn on them.

+The mirliton vines have been difficult to grow.  They do not make millions until August but so far we have no militon vegetables on the vines.  While the vines right now look okay and strong, during their growth they’ve been weak and then strong and then weak looking.  We were really hoping this would go well since we both love stuffed mirlitons and have such fond memories of Roy’s mom growing them in their garden.

Our fig trees are really weird.  These are a few of the figs still on the tree.  They are all still green.  Sometimes one will ripen and something eats part of it right away.  Most of them haven’t gotten anywhere near ripe. They have received a good soaking every day so we don’t know if something is wrong or if they are just late producers!

The yellow onion crop was pretty small and the onions themselves were small.  I planted 100 yellow onion sets (tiny onions) and this is about half of what it produced. The largest ones are about tennis ball size. 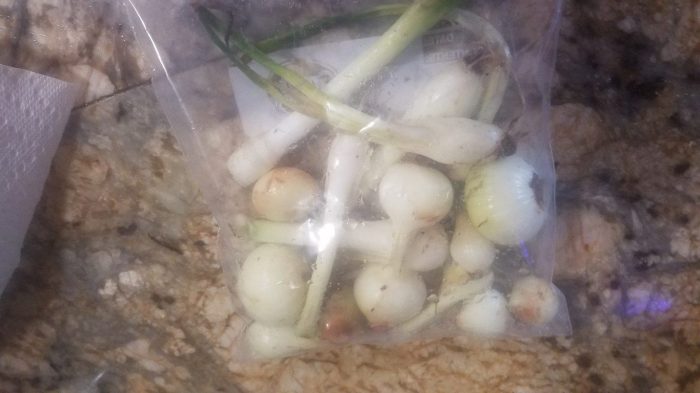 We’re using the green tops of the onions on our baked potatoes tonight! 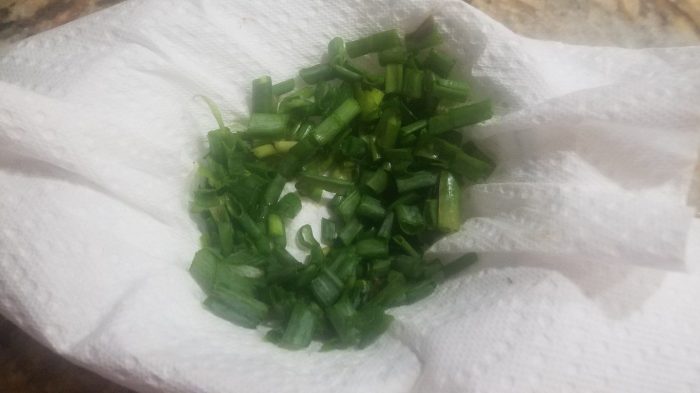 I love mangos and want to try growing them.  I found a video showing how to do that and am trying it!  The picture below shows the bottom half of a 2 liter bottle. The two baggies contain two different mango seeds.  I’ve always thought the seed was what was inside the mango that had lots of hair on it.  Come to find out that the actual seed is inside of that hairy thing.  The video said to gently dig out the seed and wrap it in a wet towel, then put it inside a zip lock bag for ten days.  At the end of the ten days you remove the papertowel wrapped seed from the baggy.  It is suppose to have a nice root growing on it.  You then add rocks and dirt to the empty bottle and plant the seed in it.  As the plant grows you put it in a larger container about every year.  Who knows if this will go well but it is too easy not to try!

The photo below shows the seeds wrapped up and the bottle cut in half. Here is a link to the video that taught me how to do this. https://www.youtube.com/watch?v=AV_J1ihtia8

The artichoke plant has not produced an artichoke but is still living so we’ll see how that does! If it’s not dead, it still has potential!

We’ve had so much rain, that continues this week that the garden has often been overflowing with water.  The seedlings are ready to plant but I’m waiting until the flood is over! 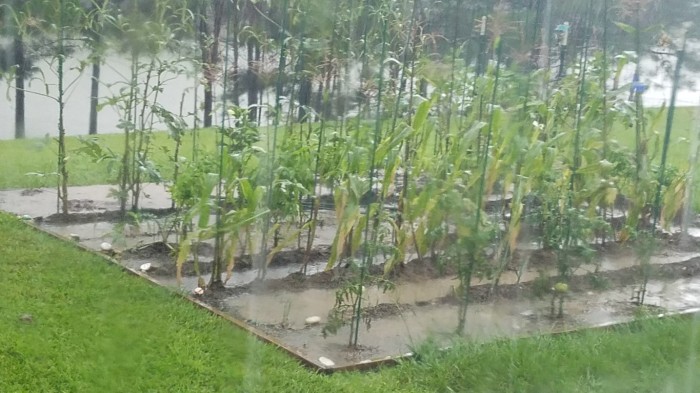 The fall garden will include cauliflower, broccoli, Brussel sprouts, tomatoes, bell pepper, eggplants and okra. We’ll get a break in our gardening once we have our first freeze here.  I don’t know which vegetables can withstand the freeze but we have very few hours each year where the temperature is below freezing. 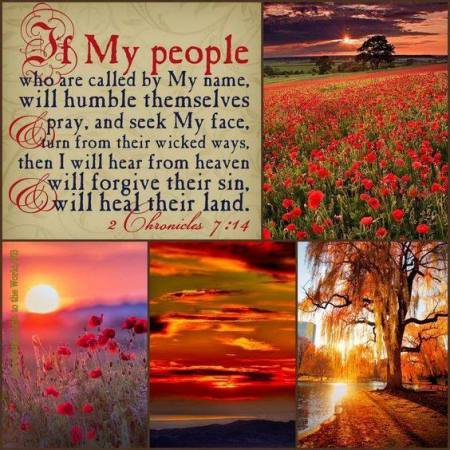