We have so many pretty flowers around our property on Rohner Road in Amite.  A while back I took a few pictures of plants blooming their prettiest and have included them with the more recent ones taken today. The majority of our flowers were transplanted from our home in Hammond when we moved here.  This year many of those plants were divided and planted in different locations around our property.

Look at the butterfly buzzing around this lantana plant 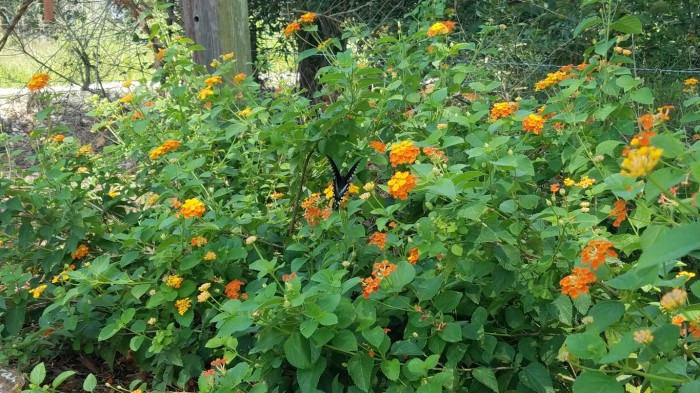 We have six oak trees on one side of our property.  I transplanted creeping daisy vines and vinca vines around each tree. I hope to improve each of the oak tree flower beds next year. 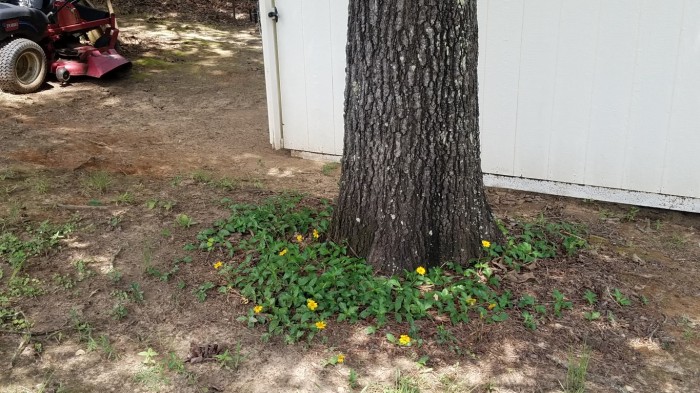 This group of oak trees had a Hosta plant added to the group.  Our renters had a beautiful one and allowed me to take a clipping which I’m growing here now. 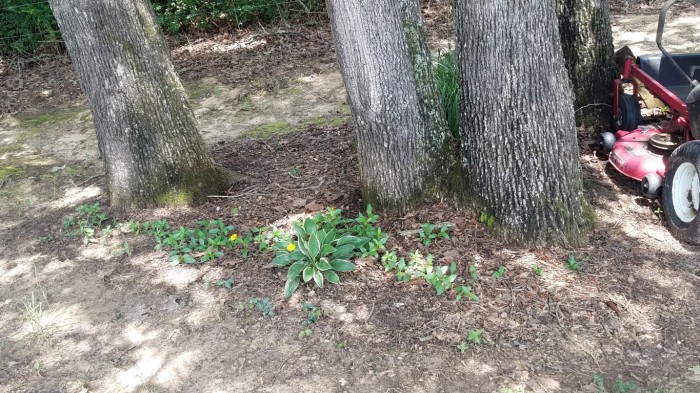 The hammock is hanging from two oak trees with new creeping plants and lilies around each of them.  The new chimes make this a wonderful place to rest! 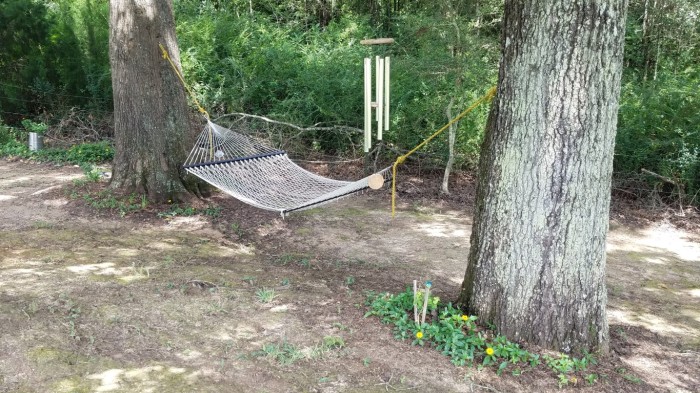 This tree is one of the two the hammock is hanging from.  There is a lot of shade here so all the flowers planted around there are taking a while to grow.  There were a dozen or so lilies blooming here earlier in the year. They’ve been cut back and will bloom again next spring!

Our eight blueberry bushes previously lived here.  They were dug up about a year ago and are planted along side the house.  Planted where the blueberries were are two azalea bushes and two lantana bushes plus lots of the creeping daisies.  The two silver urns have strawberry plants in them.   Lots of medium size rocks painted with several states name on them outline this new garden space. 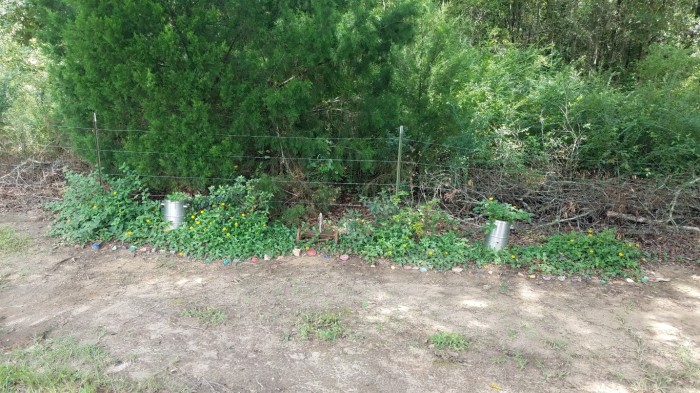 Roy’s grape vines are doing okay but have not begun to produce anything.

These ferns were being smothered by the creeping daisies in the garden above so they are now living next to the concrete patio and are starting to grow nicely.

The lilies alongside the concrete patio. They were so crowded that a lot of them were transplanted to other places on the property.  Still a lot remaining to bloom next year. 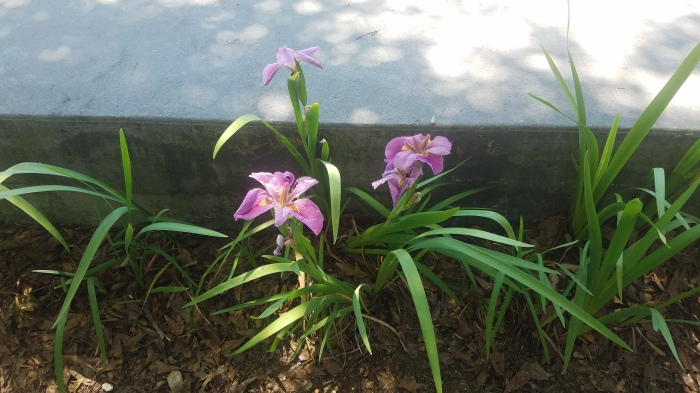 Flowers and Lillies are growing at the base of both mailboxes.    The Lillies have been cut back for the winter.

It takes a while for the vinca vines to take off but they are starting to show up real well. 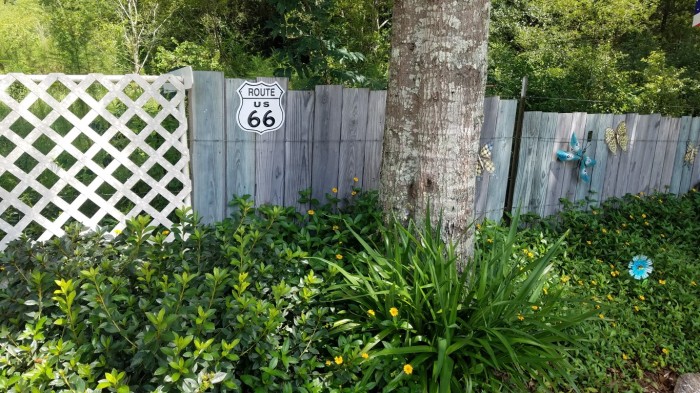 Earlier in the summer creeping daisies and vinca vines were planted around the septic tank covers.  The first picture was after a month of growth.  The second was taken today about 2 months later. 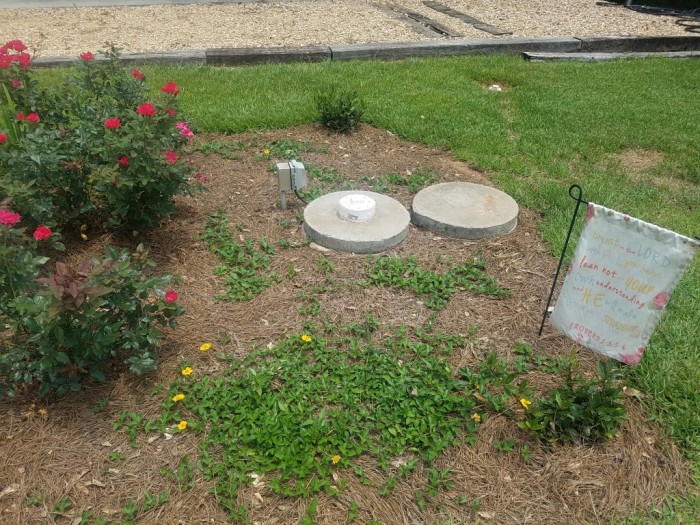 The blueberry bushes are flourishing in their new location with more sunlight! 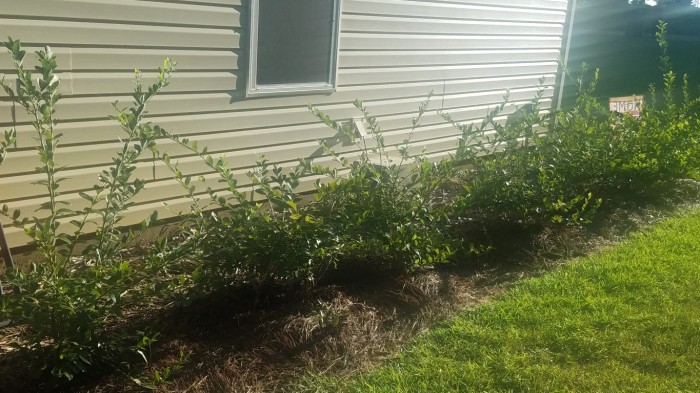 This is at the base of our huge pine tree by the road.  In a couple of years, the little flowering vines, plants, and lilies will make a beautiful welcome to those coming to visit. 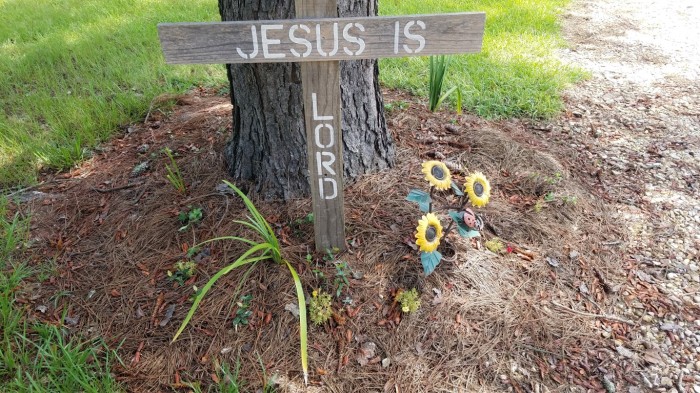 The rose bushes and camellias are growing bigger and get cut back when needed so they fit within their designated area.  I’d like to expand the area they are in so they can grow more. Roy’s kind of in charge of the work to do that so we’ll see if that wish of mine comes true!

Last fall these adagio bushes were cut back as much as we could.  The first photo is after they started coming back.  The second photo is today.  I don’t think these two bushes could be any prettier. 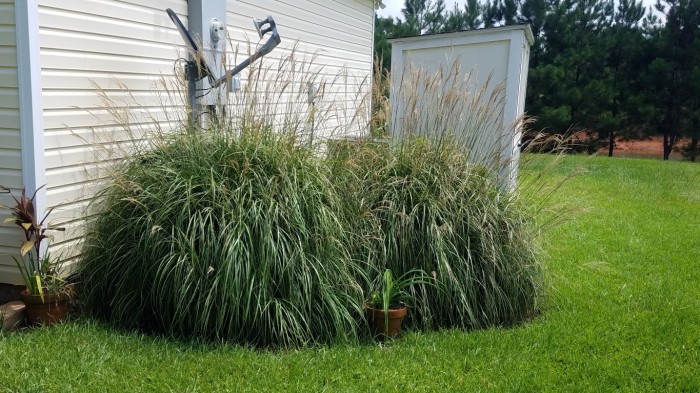 While we traveled out west we collected cactus from a couple of places and are enjoying the beautiful flowers that the bigger cacti grow.  The smaller ones in the blue bowl are soft cacti and make a yellow flower when they bloom. 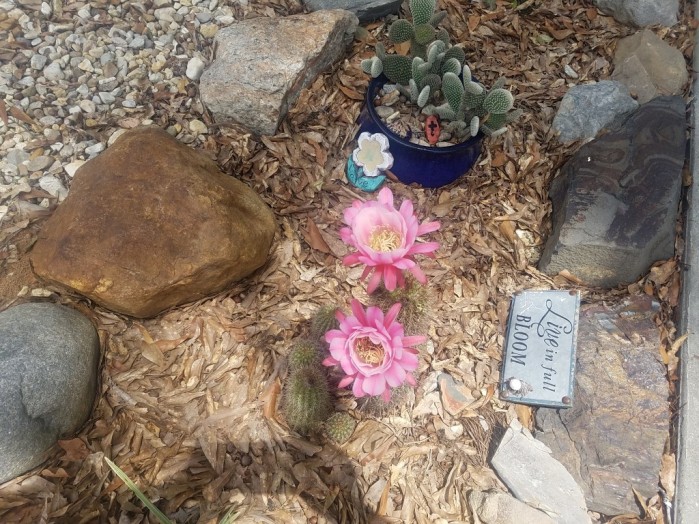 The varigated liriope was one of this years transplants.  From one big bunch elsewhere I got six transplants!  The red bush roses are doing really well.

A sweet friend, Ellen, gave us a daisy plant for Easter.  Once the daisies stopped blooming it was planted in the garden and is starting to spread out.  Can’t wait to see the daisies there next year!

So that’s the flowers around our property. Writing this helps me know next year what’s going to grow in each place since several of them die back in the winter.  I don’t remember well and this helps me.  I hope you enjoy it as well! If anyone loves the creeping daisies plant and wants some, let me know.  I obviously have enough to share!

I hope to share next time how our vegetable and fruit gardens are doing. Evert thing is in a period of transition but is still doing really well!

This is a true story. It is a story of God and His Faithfulness in ALL things.

And now – THE PEANUT BUTTER STORY

During a season of my life when I was a single mother and struggling financially, one of my daughters came and asked what might seem like a simple request. She said, “It’s been a while since we’ve had any peanut butter. Could we get some?” I told her I’d see what I could do about that and she went off to bed.

Well, I remember laying on the couch and crying like a baby because I knew there was no money to buy peanut butter with. I had a good old fashioned pity party. I cried out to God and told Him how unfair it was that my children had to do without such a simple request over circumstances that were not their fault. I told Him I felt ashamed to question Him and complain when we certainly had not gone hungry. Many friends and church family had been faithful to help us. God had shown His faithfulness time and time again.

I told Him it surely would be nice to be able to go to the store and get not only our needs but also a few “wants”, like peanut butter! I cried myself to sleep feeling like a failure as a mother. (The peanut butter was just the straw that pushed me over the edge of much financial stress)

The next morning I got up to go run the Meals on Wheels route that I worked that summer. I took one of the girls with me every day so I would have some special time with the daughter who went for that day. The same one went with me that day who had asked about the peanut butter.

I’m sure she wondered why I was crying before she could even finish her question! Absolutely, we would love to have such a precious gift! In that moment it was more valuable than a can full of gold! Sure, a can of gold would have bought a house full of groceries, but not the lesson my children and I learned that day and that we have never forgotten.

God does hear our prayers, He hears our heart cries. He hears a little girl say “can we get some peanut butter” when there’s no money to buy it.

That little lady could have given us a loaf of bread or a bag of potatoes. But it would not have been the miracle that God wanted us to have. It would have been appreciated but not something that I would remember so vividly 20 years later.

My God is an awesome God and He cares about me personally. He cares about you too. Bring your needs and your concerns to Him. He will show you how big, and loving, and able He is.

I’ve just always felt bad that the poor little lady had “the gas” all night to get our miracle to us! 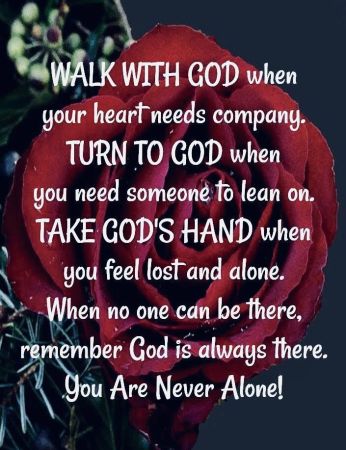 At age 5 his father died.

At age 17 he had already lost four jobs.

Between ages 18 and 22, he was a railroad conductor and failed.

He joined the army and washed out there.

He applied for law school, he was rejected.

He became an insurance sales man and failed again.

At age 20 his wife left him and took their baby daughter.

He became a cook and dishwasher in a small cafe.

He failed in an attempt to kidnap his own daughter, and eventually he convinced his wife to return home.

On the 1st day of retirement he received a check from the Government for $105.

He felt that the Government was saying that he couldn’t provide for himself.

He decided to commit suicide, life wasn’t worth living anymore; he had failed so much.

He sat under a tree writing his will, but instead, he wrote what he would have accomplished with his life. He realized there was much more that he hadn’t yet done. There was one thing he could do better than anyone he knew. And that was how to cook.

So he borrowed $87 against his check and bought and fried up some chicken using his recipe, and went door to door to sell them to his neighbors in Kentucky.

Remember, at age 65 he was ready to commit suicide.

But at age 88 Colonel Sanders, founder of Kentucky Fried Chicken (KFC) Empire was a billionaire.

Moral of the story: It’s never too late to start all over.

MOST IMPORTANLY, IT’S ALL ABOUT YOUR ATTITUDE. NEVER GIVE UP NO MATTER HOW HARD IT GETS.

You have what it takes to be successful. Go for it and make a difference.