In 1979 before our oldest son was born my parents bought a big heavy sturdy rocker to rock our little man at night and when needed. It was such a thoughtful gift from my parents who really could not afford something like that.

That rocker is over 41 years old. It left our family for a spell and is now back in our family!

Oddly enough I haven’t found any photos of me holding the babies in my arms. Of the hundreds of times, day and night that happened no photos.

Over the years, when we had the rocker, I’ve sanded, stained and varnished it about every 5 years. Nothing like what Roy is going to do in this major refurbish!

The first photos below are of our sons sitting in the rocker as they grew up.

This one of me very pregnant sitting with lots of shower gifts also has the rocker when it was first received. 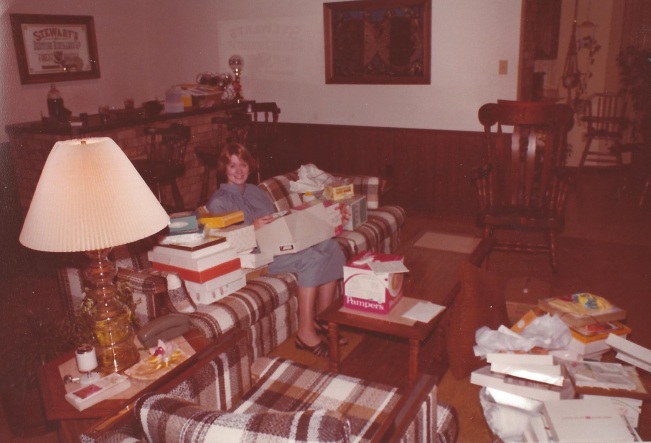 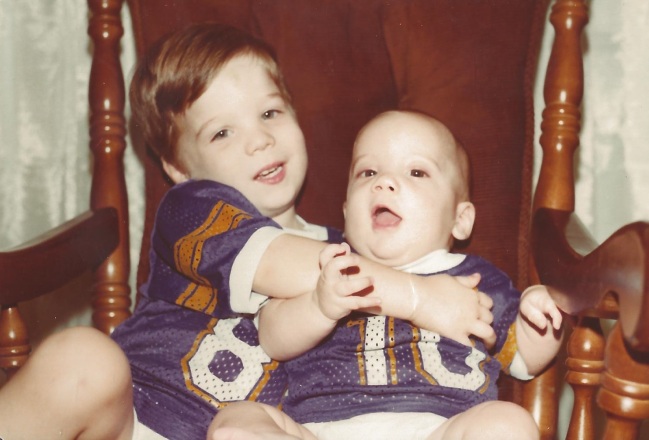 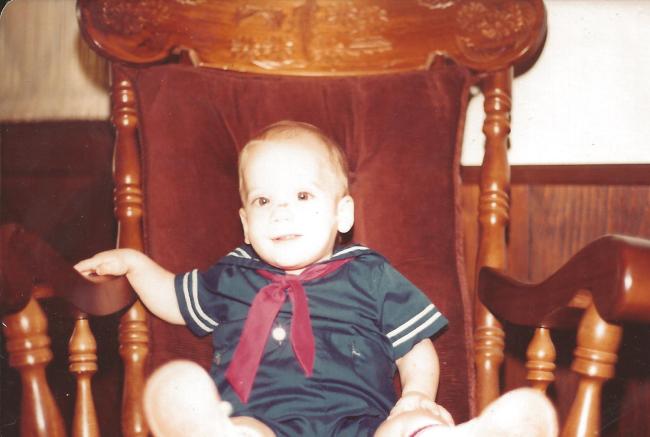 Later in the rocker’s life, we used it in the living room of our house on Hinson Road in Hammond. This is my mama and our oldest son.

In 2012 when we decided to live in our RV on the road we sold almost all our possessions including the rocker. It was sold to a young couple, Angela and Russell, we worked with at Southeastern. After living on our back porch for several years it had pretty much worn out when they bought it.

Last month I received a message from Angela that they were going to sell the rocker and wanted to know if we were interested in buying it back. I just wanted to cry I was so happy while reading her message and seeing the picture she sent of the old rocker. The thought of having the rocker back that I rocked my babies in was an overwhelmingly emotional feeling.

After checking with Roy I wrote Angela back and said: “The answer is YES!” That Friday we picked it up from their house while being virus responsible and social distancing the exchange!

I imagined sanding it down really well, staining it and putting some shiny stuff on it.

That’s not Roy’s way so the following are some of the photos of the initial work Roy’s done on bringing the rocker back to its former life!

Here’s the rocker when we got it home and Roy started working on it.  Several layers of various parts of the rocker were separating so Roy started by gluing XXXX and clamping them together. The headrest was first.

The headrest was removed and the rocker has moved back to Roy’s office.

These are photos of the backrest slats that have separated over time.  Roy calls it delamination.

Since Roy only has a few clamps he’s doing one of the slats at a time.   He really doesn’t have enough to do each slat properly. Another one of those things he used to have lots of that we sold!

This is where the repair work stands right now. One slat down and three more to go!

There are cracks in the bigger pieces, mostly the seat that will be fixed after the slats. It is not quite the quick and easy project I thought it would be!  I’ll update here as progress is made on bringing this beautiful old rocker back to life! Thanks, Angela for thinking of us first before you sold it to someone else! You made this old mama a happy lady!

Me: I’m falling apart. Can you put me back together?
God: I would rather not.

Me: Why?
God: Because you aren’t a puzzle.

Me: What about all of the pieces of my life that are falling down onto the ground?
God: Let them stay there for a while. They fell off for a reason. Take some time and decide if you need any of those pieces back.

Me: You don’t understand! I’m breaking down!
God: No – you don’t understand. You are breaking through. What you are feeling are just growing pains.
You are shedding the things and the people in your life that are holding you back.
You aren’t falling apart. You are falling into place. Relax.
Take some deep breaths and allow those things you don’t need anymore to fall off of you.
Quit holding onto the pieces that don’t fit you anymore. Let them fall off. Let them go.

Me: Once I start doing that, what will be left of me?
God: Only the very best pieces of you.

Me: I’m scared of changing.
God: I keep telling you – YOU AREN’T CHANGING!! YOU ARE BECOMING!

Me: Becoming who?
God: Becoming who I created you to be! A person of light and love and charity and hope and courage and joy and mercy and grace and compassion.
I made you for more than the shallow pieces you have decided to adorn yourself with that you cling to with such greed and fear.
Let those things fall off of you. I love you!
Don’t change! … Become! Become!
Become who I made you to be. I’m going to keep telling you this until you remember it.

Me: There goes another piece.
God: Yep. Let it be.

I like this young man’s writing and encourage you to click that link and go check him out. He even has a book called Hey God. Hey John!